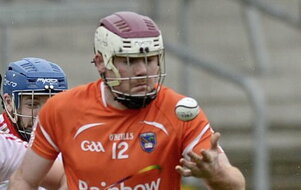 EOIN McGuinness has been hurling Newry Shamrocks for “longer than some of the other boys have been alive”.

Not far off 36, but still a little bit younger than brother and team-mate Artie, Eoin is one of the elder statesmen of the club’s senior hurling team.

A vibrant mix of youth and experience captured the Down intermediate title last year and as they prepare to welcome senior hurling back to Newry for the first time since 1987, McGuinness admits they carry more than their own hopes and dreams into an historic clash with Bredagh at Páirc Esler on Sunday.

Oisin McGuinness – who died suddenly in 2009 aged 16 – was a talented hurler with the club and would almost certainly have been among those slipping on the helmet and bashing the butt of the hurl against the concrete floor of the dressing room along with his team-mates to rouse themselves for their significant meeting with their south Belfast rivals.

As McGuinness reveals, though, since his tragic death, he has always been with them.

“He’s at the forefront of our minds when we take the field on Sunday. He's always with us

“We’ve a number of good Shamrocks people who have passed away and we’re going out as much to play for them as we are playing for ourselves.”

Last year’s breakthrough win over Carryduff in the intermediate final propelled Shamrocks onto the senior stage in Down and they will know compete in an initial five-team round-robin format with Bredagh, Ballygalget, Ballycran and Portaferry for the Jeremiah McVeagh Cup

Despite the daunting prospect of taking on the three hurling powerhouses from the Ards peninsula, McGuinness felt the time was right for them to make the step up.

“It may take us a couple of years but our aim is to stay at senior as long as we can and get the next generation through because senior hurling in the Newry locality, for the first time since 1987, it's massive.

“It's huge for us as players to think of all the boys that came before us and to actually get them playing, because we were junior team for years, we were intermediate team for years, so the next natural progression was to move into senior and test ourselves against the best teams.”

McGuinness, who also plays county hurling for Armagh, has been a senior with the Shamrocks for the best part of two decades, although he does joke that him and Artie “are like spring chickens compared to Ronan Sheehan in goals.”

The influence of Down senior manager and Shamrocks boss Sheehan on hurling in Newry has been immeasurable according to McGuinness who also believes that although this represents the end of a journey, it us also the beginning of another one for the club.

“Ronan’s influence is massive. We have a lot to thank Ronan for. For getting us there, for putting the effort in. He's club man, he’s a Newry Shamrocks man. He’s all about inclusion,” McGuinness.

“He’s very honest when it comes to hurling and what we needed to do to be a senior hurling club. He doesn't shy away from any of the facts or figures.

“We need numbers, we need people, we need coaches and Ronan drives that constantly - some people say he's getting younger!”

Prior to playing county hurling with Armagh, the McGuinness brothers hurled for the short-lived South Down team – a non-Ards county team aimed at promoting the game outside its traditional stronghold.

Although it was a brief in existence, McGuinness believes the county are now reaping the benefits of that initiative.

“The South Down team was an experiment that, more than anything, probably started a conversation of what we need to do to get Down hurling to where it is now, “ he said.

“If you look back at the way Down senior county team was going at the time, when the South Down team was started, that pushed the South Down players to realise ‘we need to make the step up’.

“And they did make a step up. And over the intervening 12 years since that experiment ended, if you look at the Down team now, there's five or six non-Ards boys starting every week. Paul Sheehan has been one of Down’s best player over the last few years.”

The Down senior championship, though, will pit top hurlers from all around the county against each other and although Shamrocks won’t be many people’s picks to make the final, McGuinness feels they only have to look at this Sunday’s opponents for inspiration.

“Bredagh are a massive club, they’ve huge numbers. They were probably always going to end up at senior hurling maybe the first year didn’t go great for them but the fairly consolidated their position as a senior hurling club and they're pretty much established there, “ he said.

“When you playing at the top level you'll only get better, the gap closes so I can see teams like Bredagh competing in the next couple of years.

“For us to have a senior hurling club game on our home pitch, it's an awful drive for us to perform, to push ourselves all, every single member of the squad.