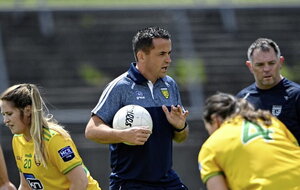 DONEGAL will throw everything at defending champions Meath this afternoon in their quest to reach a first ever senior All-Ireland final.

The Ulster side have nothing to lose and coming into this semi-final at Croke Park - the second of a double header - they will quietly confident having disposed of Dublin in the quarter-final just seven days ago.

As one of just four teams left in the competition, confidence and belief have a part to play and if Donegal can produce their heroics from a week ago putting in the same high level performance there is no reason why they cannot be back in Croke Park in two weeks’ time playing in a final against either Kerry or Mayo.

Donegal last reached the semi-finals back in 2018 when they lost out to Cork. Meath, as we know, were here last year when they shocked Cork with an extra-time win to reach a first senior final. Donegal, despite having Meath at their opposition today, can and will have taken extra belief from the Royals and what they achieved less than 12 months ago, as it conveyed the message to the rest that it does not always have to be the Dublins and the Corks of this world who reach the finals and win them.

Indeed, for the first time in 11 years, the 2022 final will not feature Cork or Dublin. The question is, however, will it be back-to-back finals for the reigning champions or will Donegal reached the holy grail at senior level for the very first time?

Donegal manager Maxi Curran has not had long to put together a plan that he hopes will dethrone the champions. Meath will present a very different challenge from Dublin but there is nothing to fear from them, he says.

The sides met in the Division One league final this year and although Meath prevailed by two points, it was a game Donegal know they could have won. Both sides are three months further down the line and today is a new day, but Donegal know they good enough to win.

“We won’t have anything to fear from them. I think we know exactly what we are dealing with,” said Curran. “We know they are going to be very defensive, they get bodies back but they do it in such a good way and they break up the field at such a serious pace. The youth in the team allows them to do that and to do it time and time again, they just don’t stop from start to finish.

“It’s a far greater challenge, brimmed full of youth and exuberance and flying full of confidence and it’s going to be a battle.

“We have put ourselves in a position to be in an All-Ireland semi-final and we have taken down one of the greatest teams ever to play and we are very proud of that and we take great heart from that and we know when we get to Croke Park, we know all we have to beat Meath and it’s whether we do it or not.”

They certainly have the firepower up front in Geraldine McLaughlin, Yvonne Bonner and Karen Guthrie, who came on as a second half substitute against Dublin and finished with 2-2. Meath have equally as dangerous forwards so this is a game where neither defence can afford to give their opposition an inch, otherwise they will be punished.

It’s finally poised and it could well come down to a game of inches with a coveted final place up for grabs.