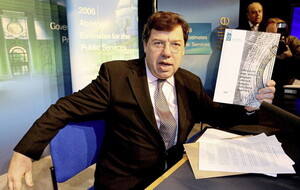 Brian Cowen, a former Minister for Foreign Affairs, spent almost one year in hospital after suffering a stroke in July 2019. Picture by Julien Behal/PA

FORMER Taoiseach Brian Cowen has revealed how he was unconscious for two weeks and initially confined to a wheelchair after he suffered a stroke.

The 62-year-old, who was taoiseach from 2008 to 2011, had been in the Beacon Hospital in Dublin in July 2019 to undergo a minor procedure when he suffered a brain haemorrhage.

The politician, who was already under anaesthetic when the haemorrhage occurred, was immediately transferred to St Vincent's, which specialises in treating brain bleeds.

The episode happened just hours after he had been at an Oireachtas Golf Society event in Lahinch.

Speaking to the Irish Independent, Mr Cowen said he was unconscious for "a couple of weeks" and it "wasn't looking good".

"When you're coming out of unconsciousness, you don't say, ‘Here, I'm back', it's the people around you that are telling you, ‘You're back'.

"You don't know anything about it yourself because you're not with the programme".

Mr Cowen, who said what had happened was "a big shock for everyone", was transferred to the Royal Hospital in Donnybrook, where he spent around nine months.

Following treatment, he was allowed back to his family home Tullamore, Co Offaly, which had to be modified as he was initially confined to a wheelchair.

"The way it works is that the first six or 12 months, you make the most part of your recovery, really, and after that it's about constant rehabilitation to pick up the 25 per cent you're short," he said.

"I'm still at it. I'm doing physical rehabilitation – it's all done at home. I'm also doing three days a week in the pool locally because the buoyancy in the water helps.

"The walking is good, but if I go a distance or if I'm going to a match I bring the chair".

Mr Cowen said he is now looking towards the future.

"Everything is good – there's no reason to think otherwise. The family are good and the kids are all finished college and are working away so they're happy. Everything is well on that side.

"We came through it. And everyone does. And life goes on and, thankfully, we're able to enjoy life and for me I've learned a lot. When you have a period of sickness or whatever, hospitalisation, you're grateful for small mercies. I'm glad I'm in good shape."