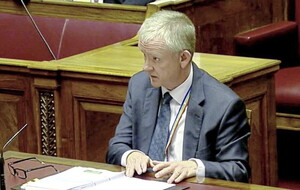 FOLLOWING the collapse of Stormont in February, triggered by the resignation of DUP first minister Paul Givan, most ministers continued in a caretaker capacity through to October, when authority was passed to their respective departments' permanent secretaries.

These senior civil servants are now effectively running government in the north, with their decision-making powers being increased by the British government as the stalemate over the Northern Ireland Protocol continues.

But who are the men and women with responsibility to act on our behalf in the absence of elected political representatives?

Read more: What is joint authority?

Heading the Executive Office in the absence of a first and deputy first minister is Denis McMahon, with the aid of NI Civil Service chief Jayne Brady.

Mr McMahon became the department's permanent secretary in July 2021. He was previously the senior civil servant at the Department of Agriculture, Environment and Rural Affairs, where in 2020 he publicly apologised for briefing then-minister Edwin Poots ahead of a Stormont debate on climate change with a paper stating "We should not be using language such as emergency or crisis". He said the error was made as he believed the language was consistent with previous statements made by Mr Poots.

Mr McMahon was also the principal private secretary to former DUP leader Ian Paisley during his time as first minister.

She gave interviews this week describing the scale of savings departments must now find to stay within a budget set by secretary of state Chris Heaton-Harris.

Richard Pengelly
The husband of DUP MLA Emma Little-Pengelly, Richard Pengelly became the DoJ permanent secretary in April after more than seven years as the senior civil servant at the Department of Health.

In the 2022 New Year Honours list he was awarded a Companion of the Order of the Bath (CB) for services to health and to government.

Former health minister Robin Swann praised Mr Pengelly's efforts during the height of the Covid pandemic, stating he "had worked relentlessly and with great commitment throughout these challenging times".

Department of Health - Peter May

Peter May, who replaced Richard Pengelly as DoH permanent secretary in April, had plenty of preparation for the role, having previously served as as the senior civil servant at the Department of Justice, the Department for Infrastructure, and the old Department for Culture, Arts and Leisure.

During his time at the head of DfI, the Oxford graduate granted planning permission for a controversial waste incinerator in Glengormley in the absence of Executive ministers following Stormont's collapse in 2017.

The previous environment minister Mark H Durkan had turned down the plan, leading the Arc21 group behind the incinerator proposal to appeal to the Planning Appeals Commission (PAC). Mr May said the PAC report had reached "clear conclusions" in favour of the plan but his decision was later quashed following legal challenge, in a case that raised questions around the powers of civil servants to act without a minister.

Colum Boyle was appointed DfC permanent secretary in April of this year, after serving as a temporary head of the civil service team leading the Department of Finance.

In May, then-caretaker minister Deirdre Hargey tasked Mr Boyle and colleagues with focusing on policies to support people through the cost-of-living crisis. She said following a meeting with him that the lack of an Executive “makes the challenge all the greater” as “vital funding is locked away”.

Mr Boyle’s department has an annual budget of almost £7 billion, including expenditure of £5.9 billion on social security payments and pensions. His previous experience at DfC includes being deputy secretary of its Work & Health Group.

Katrina Godfrey served three years as permanent secretary at the Department for Infrastructure before her appointment to DAERA in April this year.

She previously worked in the Executive Office and Department of Education and is a Visiting Professor at Ulster University where she teaches on the Masters in Public Administration.

Ahead of joining the Department of Finance, Neil Gibson was one of the north’s leading economy experts, serving as chief economist in Ireland at EY (Ernst & Young).

He had previously headed the Northern Ireland Centre for Economic Policy at Ulster University, and was also a director at Lisburn-based consultancy Oxford Economics.

Appointed to his new permanent secretary role in February, he replaced interim head Colum Boyle, who took the reins in 2021 from Sue Gray, who went on to investigate the ‘partygate’ allegations of gatherings in Downing Street that breached Covid regulations.

Before being appointed to the head of the Department of Education’s civil service team, Mark Browne had been deputy secretary at the Executive Office for seven years. He had also served in the same role for the old Department of Agriculture from 2009 to 2013.

In recent weeks, Mr Browne has visited schools in the north to meet staff and pupils, and has taken on roles including being an ambassador for Book Week NI.

Secretary of State Chris Heaton-Harris has signalled that the education department will have to find significant savings to remain within budget.

Prior to her posting as DfI permanent secretary, Julie Harrison served a variety of policy and advisory roles in her career, including with the Strategic Investment Board and the National Lottery Community Fund.

Just before accepting her latest civil service posting, she had been employed as director of safer communities with the Department of Justice since 2020 – a role that saw her take responsibility for policy on areas including domestic abuse and organised crime.

Department for the Economy - Mike Brennan

Mike Brennan had worked as an economist at the Northern Ireland Economic Council before joining the civil service, working primarily at the old Department of Finance and Personnel.

He was appointed as permanent secretary at the DfE in December of 2020, having previously been deputy secretary of the department’s EU Exit Policy Group for over three years.

Two months into his new role, Mr Brennan warned that the health of his colleagues was suffering as a result of the department’s 25 percent vacancy rate, which left remaining officials facing the pressure of delivering multiple Covid-19 grant support schemes.