What is Joint Authority? 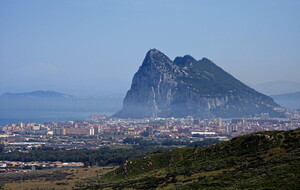 A referendum in 2002 on joint authority by the UK and Spain in Gibraltar saw residents overwhelmingly vote to remain British.

THE vacuum caused by the absence of a Stormont Executive has nudged discussion of joint authority to the fore, causing jitters among unionists.

Taoiseach Micheál Martin warned last month that the collapse of power-sharing would ultimately mean a more significant "consultative" role for the Irish government north of the border.

The comments prompted a sharp response from DUP leader Sir Jeffrey Donaldson, who said unionists "will not accept joint authority" and it would represent an abandonment of the Good Friday Agreement.

The Northern Ireland Office also said joint authority was not being considered, with the consent principle governing the constitutional position of the region.

Yet polling has indicated significant support for a greater governance role for the Republic in the north’s affairs if devolution at Stormont fails.

The notion of joint authority has been dismissed by British prime ministers in the past.

Margaret Thatcher emphatically stated "That is out" in 1984, although a year later she would sign the Anglo-Irish Agreement, formally giving Dublin an input into how Northern Ireland is run.

Theresa May told the House of Commons in 2017 that she was "happy to confirm" it was not an option if power sharing does not return.

Following Ms May’s comments, the Republic’s foreign minister Simon Coveney insisted the Irish government’s position was "there can be no British-only direct rule".

The threat of joint authority was also said to have been a motivator for late DUP leader Ian Paisley to finally enter an Executive with Sinn Féin in 2007.

Ian Paisley claimed a 'Plan B' of joint authority was used by Tony Blair's government to pressure him into power sharing in 2007.

Mr Paisley claimed the Tony Blair-led government had vowed to impose it as a 'Plan B' should attempts to revive power-sharing come to nothing.

It’s clear the idea remains popular in some quarters, certainly in the Republic if not London since the Blair years, but if it were to happen, what would it actually entail?

The New Ireland Forum, established by then-Taoiseach Garret Fitzgerald, which earned Ms Thatcher’s "out" dismissal, suggested joint authority would mean "the London and Dublin governments would have equal responsibility for all aspects of the government of Northern Ireland".

The plan also suggested an "enabling provision for the exercise of major powers by a locally elected Assembly and Executive".

Britain has previously put joint authority on the table for another contested region.

In 2002, a referendum was held in Gibraltar on sharing sovereignty with Spain.

A referendum in 2002 on joint authority by the UK and Spain in Gibraltar saw residents overwhelmingly vote to remain British.

Political commentator David McCann, deputy editor of sluggerotoole.com, said the people voted "overwhelmingly to reaffirm their Britishness" in the ballot.

He suggests any potential joint authority for the north would be of a much more diluted nature than that proposed and rejected in Gibraltar.

"For some, joint authority is almost what we have now, with an Anglo-Irish Agreement model that has the Irish government in an official consultative role," he said.

"For others, it would mean full joint sovereignty, which raises problematic issues such as taxation.

“A form of joint authority could see Irish government ministers, in a co-guarantor role, being in the room when decisions are made.

"Practicalities would mean that ‘true’ joint authority in the sovereign sense would likely not be manageable in a constitutionally contested society such as ours."

He added: "The overwhelmingly preferred option for both London and Dublin remains devolution."

I should not be making Northern Ireland budget decisions, Secretary of State says