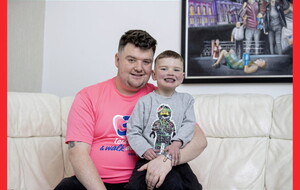 THE leaders of Northern Ireland's five main political parties have united for the first time in almost a year in a bid to get new organ donation legislation up and running.

The party leaders have jointly written to the Secretary of State Chris Heaton-Harris calling for a legislative intervention which would give effect to the soft opt-out organ donation process approved by the Assembly last year.

The legislation is named after Dáithí MacGabhann, a six-year-old on the organ transplant waiting list whose family have campaigned for the new law.

The Organ and Tissue Donation (Deemed Consent) Bill, which received Royal Assent on March 30 last year, would bring the north into line with the rest of the UK.

Read More: A good year for Daithi, family, but one that started with heartache and worry

It would change the law to an opt-out system, meaning people would automatically become organ donors unless they specifically request otherwise.

However, the Department of Health requires secondary legislation to be passed by the Assembly to become law and this cannot happen with Stormont suspended.

The letter, which has been signed by Sinn Féin's Michelle O’Neill, the DUP's Jeffrey Donaldson, the Alliance Party's Naomi Long, the UUP's Doug Beattie and the SDLP's Colum Eastwood, is viewed as a significant development, given that Stormont has been at an impasse since February last year.

"As leaders of the five main parties, we write to ask that your Department works with our Department of Health and legislates in Parliament to ensure this new system for organ donation can be operational as soon as possible," the letter states.

"We understand that the Department of Health has draft legislation prepared which could enable the law to be operational by the Spring of 2023".

Speaking to The Irish News, Dáithí's father, Mairtin said he welcomed the letter and hoped it would bring a solution.

Mr MacGabhann said had also written to Mr Heaton-Harris yesterday on behalf of Donate4Daithi asking for a meeting to discuss the legislation.

He said actor Jimmy Nesbitt had been contact with the family and was "chasing everyone and anyone he could to get answers".

"All the hard arguments have been fought," he said.

"Now, because they aren't sitting, it can't go through? It's disheartening. Dáithí deserves to see Dáithí's Law come to pass."

Mr Heaton -Harris last night said he would be very happy to meet the MacGabhann family.

An NIO spokesperson said: "If an Assembly were sitting, this matter could be resolved swiftly and the Secretary of State asks the Northern Ireland parties to realise the unacceptable impact that the lack of locally accountable political leaders are having on fundamental issues in Northern Ireland."