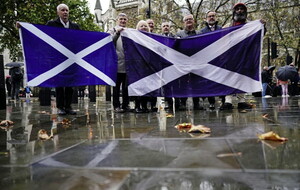 THE PRESIDENT of the SNP told last night's Ireland's Future event that the UK Supreme Court decision on a fresh Scottish independence referendum "proves that the UK is not a voluntary union".

Michael Russell was speaking in Belfast just hours after the court's judges ruled unanimously that the Scottish Parliament does not have the power to hold a vote on independence on October 19 next year because the issue is reserved to Westminster.

Addressing last night's Ireland's Future 'Belongs to You' event at the Ulster Hall, the former Holyrood minster said the judges had decided that existing law "does not permit a member of a voluntary union to seek the opinion of voters on whether that union should continue".

"Imagine if that had been the situation in the UK prior to the Brexit referendum?" he said.

"Imagine if there had been no Article 50 and no way out despite a Tory UK manifesto commitment to consult the people?

"What a stooshie that would have caused - a stooshie from the very people who are lauding this judgement to the skies."

Mr Russell said that according to UK law, the people of Scotland and Northern Ireland "can be taken out of the EU against their will by a government they didn't vote for" yet they were "not permitted to vote to leave the UK".

He echoed Scottish First Minister Nicola Sturgeon's assertion that "Scotland's campaign is now as much about democracy as about independence".

"It is not the judges who are wrong, but the law – and the law can be changed," he said.

He said that if Westminster did not change the law then it proved that the that the UK is not a voluntary union - "for any part of that union".

"Because if this stands it means that only way to change the current situation would be for the SNP to win a majority in the House of Commons but there are only 59 Scottish seats in the 650 member Westminster parliament – clearly that is a nonsense," he said.

The SNP president said it would be "foolish" to think the court's ruling ended the matter.

"This is, and will continue to be, considerable anger in Scotland but there is also a renewed determination of ensure that the people have their say," he said.