Kincora demolition: ‘The building will always be there in my mind' 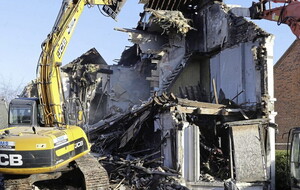 The demolition of the former Kincora Boy's Home in east Belfast. Picture by Hugh Russell.

DECADES after leaving the Kincora Boys’ Home in east Belfast, an abuse victim watched silently as his former bedroom was torn down within minutes.

Gary Hoy (61) was first sent to the notorious home on the Upper Newtownards Road as a teenager in the 1970s.

He arrived yesterday morning with his dog to watch the entire building demolished in just an hour while passers-by beeped their car horns in support.

Speaking to The Irish News, he pointed out his former bedroom on the first floor moments before the arms of two mechanical diggers quickly swept the walls away.

“I’m still fighting to this day for justice, I still can’t get anywhere in court. It’s being put back and put back,” he said.

“It seems I’ll never get justice. Since I came out about it eight years ago I’ve already taken two heart attacks with the stress.”

Asked how it feels to see the building knocked down, he answers calmly but does not gloss over the reality of his
experiences.

“It means a lot. If you look up there in the far-left corner that was my bedroom,” he said.

“Having the like of your man McGrath [one of three care home staff jailed for abuse] going in when we were sleeping, lifting the duvet and standing looking at you.

“When you’re a kid you don’t understand what the f*** is going on.”

First opened in 1958, Kincora was closed in October 1980 after a sex abuse scandal.

The historical institutional abuse inquiry found that dozens of boys were abused there, but did not find evidence that security agencies were complicit.

A recent report by the Police Ombudsman for Northern Ireland, Marie Anderson, said that complaints from some former residents that police failed to investigate allegations of sexual abuse were “legitimate and justified”.

Mr Hoy added: “The building will always be there in my mind. I’m 61, I’ve carried what happened to me for 47 years.

“Apparently all that crap was going on from 1958. So obviously someone knew what was going on but they kept sending wee lads into it.

“I hope for other victims watching today that they do feel they can talk about it.”

Since the revelations of abuse in 1980, the sight of the derelict building had become a grim fixture of Belfast for thousands passing it every day. By around 11am yesterday it was replaced by a view of an unusually clear blue sky for November.

One couple in their late 70s who live nearby, Leslie and Violet Ross, arrived to watch the demolition and said it was heartbreaking to think of the young boys affected.

Mrs Ross said: “Every time you walk past it, all you can think about are these awful memories, that people would come along and take advantage of these young boys, innocent children.

“I hope now that people won’t have to think about it as much as they did”.

DUP MLA David Brooks said: “I think there’s relief here in east Belfast to see it gone, you can hear the tooting of the cars. That shows what it means even to the general community.

“I can’t imagine what it means to the victims that have had horrors visited upon them, to see it finally gone and not have to walk past it or drive past it in their day to day lives must come as some relief. But they won’t forget and we should never forget about the things that were done in this place regardless of whether the building stands there or not.”

Hagan Homes bought the site in 2019 and are now planning to clear the rubble away and build apartments. The company said it was “fully aware of its notorious history and, at every step of the planning process and future activity, it continues to recognise the suffering and wrongdoings that took place here”.