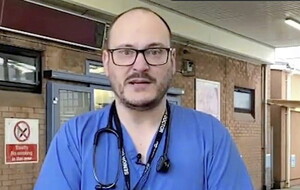 Emergency room staff in one hospital were in “dire straits” yesterday with more than 100 people waiting to be treated and close to 50 not able to be admitted.

Altnagelvin Hospital's Dr Sandy Nelson took to social media to reveal the pressure staff were under at midday.

He said 110 people were waiting to be seen, a further 45 waiting to be moved beyond the emergency department and four ambulances backed up and unable to offload patients.

Dr Nelson said: “I've got four ambulances awaiting offload which means they can't get out into the community to come and see their emergencies.

“There are just patients everywhere and we are struggling. If you can do anything to help us it would be greatly appreciated, be that coming to pick up your relatives that are due discharge as early as possible or saving the emergency department for absolute emergencies.

“We are really in dire straits and I'm asking you for your help at this time.” The post was shared on Twitter by the Western Trust.

The Northern Trust, in a statement, said emergency departments at Antrim Area and Causeway hospitals were under "extreme pressure" for several days.

On Monday, 349 were admitted to the emergency department over a 24-hour period, a record.

"The patient waiting longest for a bed has been nursed in the emergency department for over two days,” the trust said.

"We also have significant numbers of patients who no longer need consultant-led care in an acute hospital but who require ongoing support in the community and we would once again ask patients and families and/or carers to please assist us at the point of discharge by accepting the first placement that becomes available."

The Belfast trust told BBC NI 134 people were in the emergency department at the Royal Victoria Hospital early yesterday afternoon.

"The sickest are being seen first, those presenting with non-urgent conditions will be waiting considerably longer," a spokesperson said.

"There is a mix of ages for those currently in the department. 52 people are waiting for a bed, with the longest wait for a bed being 64 hours."

At the same time on Tuesday, 43 children were waiting to be treated, the longest for five hours.