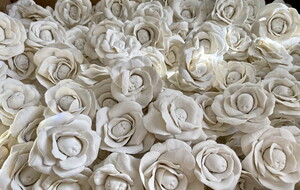 The artwork consists of 796 ceramic white roses. While each flower represents a mother, inside each flower bears a baby's face, which is wrapped in the petals

A NEW art installation in memory of the 796 Tuam babies is to be unveiled this weekend at a non-religious service.

The work by Alison Rodgers, a Newry ceramic artist, will be put on display during the ceremony, which will take place at the Children's Burial Ground Memorial in Tuam on Sunday at 2.30pm.

The service will be officiated by celebrant Christina Breen. In addition, there will be poetry by Irish historian Catherine Corless and songs by Anne Rynne.

Everyone attending is asked to bring a memorial flower.

In May 2014, Catherine Corless revealed that 796 children had died at the Tuam mother and baby home, which operated between 1925 to 1961. However, there were no burial records for any of the children.

In 2017, children's remains were found in a mass grave in a septic tank. The scandal made headlines, resulting in an inquiry being set up.

Moved by what had happened, Alison Rodgers began to put together an art installation in memory of the children. The artwork consists of 796 ceramic white roses. While each flower represents a mother, inside each flower bears a baby's face, which is wrapped in the petals.

Speaking about the artwork, she said: "Back in 2014 when the news first hit, it resonated with me. I just couldn't move on from it. When I started to research more and find more, I was really appalled. I wanted to do something to show a bit of love or kindness, that somebody cares.

"I was thinking of my own experience of grief. The only thing you can leave are flowers as a token of love and respect. I thought I could make porcelain flowers. I just started making them. I put the baby's faces in the centre. It is an installation three-foot wide, the same as a baby's coffin, but runs the length of the septic tank."

She added: "It just sort of hit me with profound sadness. It will always stay with me. I think it shouldn't be forgotten."