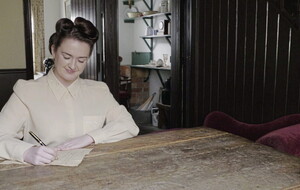 A NEW TG4 documentary is to tell the inspirational story of a Belfast doctor who kept his promise to return to his Co Tyrone sweetheart after facing death at the hands of the Japanese army during the Second World War.

Frank Murray was a doctor serving in the Royal Medical Corps when the British army found itself on the brink of a catastrophic defeat at the hands of the Japanese Imperial Army in Singapore.

More than 100,000 troops were about to surrender, with their fate and Dr Murray's in the hands of an enemy that had shown no mercy.

As death surrounded troops on all sides, Dr Murray sent a hurriedly-written letter to his fiancée Eileen O’Kane, a geography teacher at Loreto Girls Grammar School in Omagh.

In the letter, he promised Eileen he would return and marry her.

Dr Murray wrote: "Where shall I be sent and what will happen to me I do not know, but I do know that I shall come back again to you. Nothing can ever stop me coming back to you. I love you now as never before."

The documentary `Litir Ghrá ón Dara Cogadh Domhanda' tells how the Belfast medic kept his promise to Eileen, returning after 42 months, after Japan capitulated in August 1945.

Dr Murray, an Irish language enthusiast, GAA man, and devout Catholic, was by then the commanding officer in a prisoner of war camp in northern Japan. It was to him that the local Japanese soldiers handed over their weapons and bowed their heads in surrender. As they made the long journey home from the far east, Dr Murray and his comrades left behind the bones of nearly a third of all the incarcerated allied soldiers, sailors, and airmen captured by the Japanese.

Frank and Eileen were reunited on the dockside in Larne in November 1945. Three months later, the couple married.

:: Litir Ghrá ón Dara Cogadh Domhanda will be broadcast on TG4 on Wednesday, October 12 at 9.30pm.