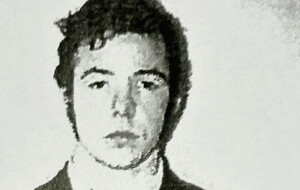 A WEST Belfast man who was the last person to be handed the death penalty in Northern Ireland has died.

Liam Holden, who was aged in his late sixties, passed away on Thursday. No funeral arrangements had been published last night for the father-of-two.

Mr Holden was sentenced to hang for the killing of a British soldier in west Belfast in 1972.

The death penalty was commuted to life in prison before a 40-year fight to clear his name resulted in the murder conviction being quashed in June 2012.

His death comes just months after he launched a civil case at Belfast's High Court against the Ministry of Defence for alleged torture and misconduct in public office.

As an 18-year-old in 1972, he was convicted of the murder of Private Frank Bell, also 18, a member of the Parachute Regiment.

Private Bell was hit by a single bullet fired by a sniper on Belfast's Springfield Road and died three days later in hospital.

The following month, Mr Holden was arrested at his home in the Whiterock area by the British army acting in the absence of the RUC.

A teenage chef at the time, he was brought to a military post at Blackmountain school where members of the Parachute Regiment allegedly deployed banned interrogation techniques.

Soldiers pinned him to the floor and poured freezing water through a towel place over his face, he claims. According to his account the repeated torture methods left him fearing that he was drowning.

He was then allegedly hooded and taken to the Glencairn estate, notorious at the time as an area where loyalist paramilitaries dumped murdered Catholics.

A gun was put to his head as the soldiers warned he would be shot if he didn't confess to killing Private Bell, Mr Holden said. He said he then agreed to a "cock and bull story" about carrying out the shooting.

Mr Holden spent four weeks awaiting execution in 1973 before his sentence was commuted to life imprisonment. He subsequently spent 17 years in prison and a further 23 on licence. He was the last person to be sentenced to death in the UK.

The murder conviction was quashed by the Northern Ireland appeal court in June 2012 in what was deemed at the time a landmark ruling.

Following news of his death, the Whiterock Westrock Historical and Cultural Society said Mr Holden would be "sadly missed by his many friends".

"We have lost a great friend and neighbour," it wrote on social media.

"Thoughts and prayers are with all the Holden family at this sad time."

Another post said: "Liam is a perfect example why we must keep fighting for justice", while another added: "An interesting, intelligent and witty man you were despite what life through at him".