Debenhams strike: Documentary being made on workers who manned pickets for 406 days 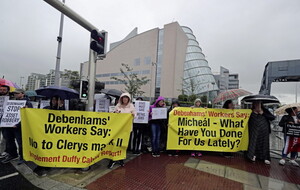 Debenhams workers protesting outside the Dáil, held in the Convention Centre in Dublin, in 2020

A DOCUMENTARY is being made about workers who took part in the Debenhams strike - one of the longest industrial relations disputes in Irish history - thanks in part to an Irish News article last year.

Staff manned picket lines for 406 days during the pandemic after the retailer closed all of its stores in the Republic and filed for liquidation in April 2020.

The pickets also included action outside the former Debenhams store in Belfast.

Fergus Dowd, who co-authored 'Tales from the Debenhams Picket Line' with Sue O'Connell, visited Belfast on Wednesday with some of the women who manned the picket lines.

The group handed a copy of the book to Queen's University's library.

Mr Dowd said an Irish News report on the book last year helped pave the way for a new 90-minute documentary, 406 Days, which is in the process of being edited.

"The book did really well. It sold out two print runs," he said.

He added: "Without your original article I'm not sure how much of this would have happened."

The film is being made by Joe Lee who won the best documentary award at the Dublin International Film Festival in 2015.

Mr Dowd is project-managing the documentary, some of which has been filmed in buildings which used to house former Debenhams outlets.

"We managed to get the workers back into Henry Street in Dublin, Cork, Limerick and Waterford," he said.

"That was emotional. The buildings are still owned by Roches Stores and they gave us permission to film."

He added: "It was so eerie. Some of the Debenhams signs are still there... but everything has gone. There's not a stitch of clothing. It's silent.

"One of the women, Carmel Grouse, got so emotional that she burst out crying when we brought her back in because she'd spent her whole life in that building.

"People had put their heart and soul into making Debenhams what it was."

Mr Dowd said one worker from Waterford explained that a nursing home resident had helped keep lookout on the picket line.

"One of the days, when the workers were standing there, a woman who was 94 came over and said she could see the bay from her room. She said to Michelle Galvin, who was the shop steward, 'can you give me your number? I'd like to help. I suffer from insomnia and I can keep a look out for when the trucks come'.

"Stories like that are amazing. When we wrote the book, it was during the pandemic and I had to meet everyone over Zoom. With this project I've been able to sit down with (the workers and) Joe. There's that level of trust there because I wrote the book."

The dispute eventually ended in May 2021 when Mandate trade union workers voted to accept a €3m training and wellness fund instead of the four weeks' pay per year's service redundancy - two weeks' statutory plus two weeks' enhanced - that they agreed with their former employer.

However, workers are still waiting to hear when their case can be heard at the Workplace Relations Commission in the Republic.

The Debenhams pickets prompted a bill in the Dáil which seeks to improve workers’ rights in the event of a company's liquidation. The bill was initially deferred for 12 months but is now passing through the Dáil.