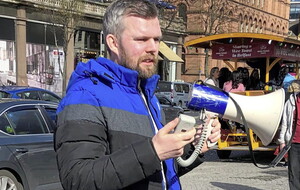 TWO Stormont ministers have been accused of "effectively ignoring" key public concerns after it emerged that they have failed to answer more than 20 of an MLA's written questions within the allocated timeframe.

Ministers are supposed to respond to written questions within 10 working days but People Before Profit's Gerry Carroll says the deadline is regularly missed.

It's thought hundreds of questions every year fail to get answers in the specified time yet ministers face no sanctions for failing to comply with the assembly's rules.

Mr Carroll said earlier this week that Communities Minister Deirdre Hargey had not responded on time to 16 of the West Belfast MLA's written questions, while Health Minister Robin Swann had missed his deadline on eight occaisions.

The People Before Profit representative said the questions to the Sinn Féin minister related to the cost-of-living crisis, housing and welfare payments, while those to her UUP counterpart addressed mental health provision and the government's neurology recall scheme.

He said of the 122 written questions submitted so far in the 2022-23 Stormont session, 24 went unanswered within the set parliamentary timeframe. Mr Carroll said even though there was no sitting executive, ministers were "still failing to carry out simple day-to-day duties".

"These questions are of direct concern to my constituents, with many coming directly from them," he told The Irish News.

"It is not good enough for highly-paid ministers to effectively ignore pressing questions around issues like the cost-of-living or our health service."

The West Belfast MLA said ministers appeared "to be flouting basic levels of scrutiny from elected representatives and the people they represent".

A spokesperson for Ms Hargey's department said: “Responses to these questions are currently making their way through the clearance process.”

A Department of Health spokesperson said: "Minister Swann is fully aware that a critical part of his work is to be responsive to the concerns raised by elected representatives and makes best efforts to respond to these in a timely manner.

"Unfortunately, some responses have been delayed owing to the high volume of questions received by the health minister."

The spokesperson said that in 2021 nearly one-third (30 per cent) of the 15,447 written questions submitted were tabled to Mr Swann.

"Since May 2022, Mr Carroll has asked minister Swann 33 questions, 25 of which have been answered. The remaining questions will be answered in due course," the spokesperson said.

An assembly spokesperson said the issue had been raised by MLAs on a "number of occasions".

"Ordinarily, when the assembly is sitting, there are opportunities for members to pursue their outstanding questions with ministers on the floor of the assembly," they said.

"The speaker also wrote to ministers directly in the last assembly mandate to remind them of the need to respect the assembly's scrutiny role by responding to members in a timely manner."