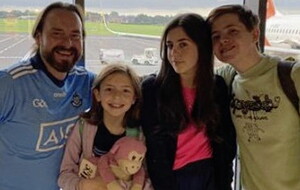 Sean McAleenan pictured with his stepchildren Emer, Cora and Niall at Belfast International Airport on Sunday just before they departed for their holiday in Spain

THE partner of a north Belfast man who drowned while on holiday in Spain has told of how the couple had hoped to marry next year.

Sean McAleenan, who was 47, and from Somerton Park, was discovered in the pool of a hotel in the Costa Dorado area early on Tuesday morning.

The much-loved stepfather had gone for a swim and was seen swimming lengths in the pool.

However a short time later his body was discovered by two holidaymakers who pulled him from the pool.

Despite efforts by paramedics Mr McAleenan could not be saved.

The Parcel Force worker had arrived at the Pineda Park Apartments in La Pineda in north east Spain on Sunday.

His fiancee Maeve Kelly and her three children, who are aged 10,13 and 16, had planned to stay for 12 days.

The paediatric nurse told how her partner had got up early on Tuesday to have coffee before going for a swim just after 9am.

A while later, when he hadn't returned, she went to the pool where she found emergency services.

"I saw the police and ambulance and I knew it was him," she said.

"They worked on him for a solid hour-and-a-half because he was so young and had no health problems. They did everything in their power."

Ms Kelly said a preliminary post-mortem results had determined the cause of death as drowning.

"I just feel like I have lost the other half of me. He came along and we were meant for each other and we had so much more living to do. We had so many plans," she said.

Ms Kelly described her partner as "the most loving, caring, hopeless romantic" who was "funny and loved kids".

"He just loved me and the kids and for anybody who would listen, he would tell them that," she said.

"He loved horses but his other big love was music, all genres of music. He was a concert-goer and had lined up Garth Brooks and Bruce Springsteen. That was our thing. We would go to concerts. We would have a ball.

"He was larger-than-life. So vivacious and he was very, very kind."

Ms Kelly revealed the couple, who had been together for more than seven years, had become engaged in 2019 and had hoped to marry in Las Vegas next year at the Little White Chapel as Sean was a "massive" fan of Elvis.

Still struggling to come to terms with the tragedy, she said: "It is your worst nightmare."

"Nobody expects something like this to happen but for it to happen in a foreign country, it just makes it so much worse."