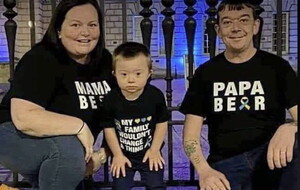 Lucius Corry pictured with his parents, Joanne and John Corry

THE family of a five-year-old Belfast boy who died suddenly after suffering a cardiac arrest have told of their "absolute devastation."

Lucius Corry, from the Market area, initially fell ill on Saturday during a day trip to Funtasia Theme Park in Drogheda, Co Louth.

On his return home, he continued to be unsettled.

Later, when he developed a nose bleed and went "limp", he was rushed to the Royal Belfast Hospital for Sick Children at around 4am on Sunday by his parents, Joanne and John.

Lucius was taken into a resuscitation room where medics worked on him for 40 minutes but he could not be saved and died shortly after 5am.

Joanne and John were given the devastating news and allowed to spend some alone time with their little boy.

After wrapping him in his blanket, Joanne sang her son a song before the couple told him how much they loved him and how they "didn't want him to go".

Speaking to The Irish News, Joanne Corry, a legal secretary, said she would remember Lucius for "the happiness he brought into our lives".

She said she and her husband John had tried for Lucius for 10 years before they gave up and were shocked when they found out they were expecting during the week of their 40th birthdays.

Lucius, who had Down Syndrome, was born with two holes in his heart.

However, it was found these weren't "affecting him" and he was given medication for the first few months.

After this, the smallest hole closed and he was taken off the medication.

Joanne paid tribute to the medical team at the Royal Belfast Hospital for Sick Children, describing them as "unbelievable."

"He (the doctor) came out and said `There is nothing I can do. I have tried everything', " she said.

"He was devastated telling us. We went in and we had to let him go.

"We just held his hand and kissed him. Told him we loved him and didn't want him to go. We sang to him".

While Lucius' parents have been told their son's death was due to cardiac arrest, a post-mortem examination has returned an inconclusive result as to the cause and further tests are due to be carried out.

However, they have been told "no underlying" health conditions were found.

Joanne said her son would be remembered as "the happiest and funniest boy you could ever meet".

"He was the most loveable child," she said.

"He loved meeting people. He was very affectionate. He said to everybody `I love you'."

Joanne said she and John had been left "absolutely devastated".

"Our lives just revolved around Lucius," she said.

"Our lives have just fell apart. I don't know how we will ever cope without him.

"He brought our family so much closer. He was like a jigsaw part that was missing.

"He just made us the happiest people ever when he came into this world. Nothing held that boy back. He was our wee superhero".