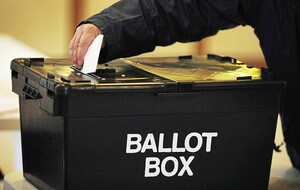 The latest poll suggests support for unity has grown by 7.5 points in a matter of months. Picture by Rui Vieira/PA Wire

THE north's constitutional future is finely poised with a new opinion poll indicating that support for a united Ireland almost matches opposition.

The latest Institute of Irish Studies-University of Liverpool-The Irish News survey shows that 39.4 per cent of respondents would vote for unity if there were a border poll tomorrow.

Those who would vote for the status quo stand at 40.6 per cent, a lead of less than one percentage point.

The figures for a future border poll are even more encouraging for the pro-unity campaign, with the number supporting unification rising to 41.9 per cent.

When asked how they would vote in 15-20 years, the proportion of those opposed to a united Ireland falls to 33.8 per cent.

If a unity referendum were called tomorrow 19.8 per cent of respondents are unsure of what way they would vote. When asked about their intentions in 15-20 years' time, the figure rises to 24.3 per cent, almost a quarter of all respondents.

On that occasion, almost one-third of people (31.9 per cent) said they would vote for a united Ireland if a border poll were held tomorrow.

The same research showed opposition to Irish unity at 45.3 per cent but there was also a significant swathe who had yet to make their minds up.

The latest poll suggests support for unity has grown by 7.5 points in a matter of months.

But Professor Peter Shirlow of the Institute of Irish Studies has cautioned about reading too much into the border poll results.

He said the latest survey, carried out between June 28 and July 10, had a "higher share than previous surveys of nationalists", which would be reflected in the growth in support for unification. The Institute of Irish Studies director pointed out that the research had a 3.1 per cent margin of error.

Notably, however, Professor Shirlow said he believed support for Irish unity was on the rise.

"After several years of doing these surveys, it is clear there is growth in support for unification, which is primarily due to demographic change, Brexit and the failure to form an executive," he told The Irish News.

Elsewhere, the survey found that changing economic and political circumstances on both sides of the border influenced considerably respondents' view on unity.

Almost a quarter of unionists (24.3 per cent) agreed that a new flag and anthem would persuade then to support Irish unity.