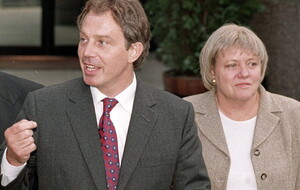 THE IRA's second ceasefire a quarter of a century ago would not have happened without the Labour's Westminster landslide less than three months before, according to Brian Feeney, historian and columnist with The Irish News.

Tony Blair steered his party to a historic 179 seat majority in May 1997, defeating John Major's minority Conservative government, which had been propped up by the Jim Molyneaux-led Ulster Unionist Party.

Pledges from the then secretary of state Mo Mowlam that Sinn Féin would be admitted to all-party talks after six weeks created the conditions that enabled republican guns to fall silent at noon on July 19, 1997.

The previous ceasefire of August 31 1994 had ended after 17 months with the Docklands bomb in which two people died and an estimated £150 million worth of damage was caused.

The new Labour leader had underlined his determination to reinvigorate the peace process with a speech in Belfast a fortnight after his election victory.

He offered a clear timetable for talks, to be completed by May 1998, and also suggested weapons decommissioning was not a pre-condition for negotiation.

The then Sinn Féin leader Gerry Adams said he supported the ceasefire because of a "commitment by the two governments to inclusive peace talks".

However, unionists were sceptical. UUP security spokesman for Ken Maginnis said: "I don't expect anyone to take a ceasefire declaration at face value.

"There will have to be a definite commitment to a permanent, complete and universal ceasefire with an indication that disarmament and the disbandment of the terrorist organisation can take place."

Mr Feeney said there were many parallels with the current political situation but stressed there was little possibility of a Labour landslide any time in the near future.

"There’s an uncanny similarity between the politics of the early-to-mid 1990s and today, with John Major’s government paralysed on Maastricht by ‘the bastards’ – the forerunners of the European Research Group – and stymied by dependence on the UUP," he said.

"The UUP successfully blocked the peace process after the first IRA ceasefire, preventing Major from fulfilling his promises to Adams and McGuinness – bizarrely the UUP saw the IRA ceasefire as destabilising."

The Irish News columnist said that without the Labour landslide, the second ceasefire – which led to all-party talks and ultimately the Good Friday Agreement – would not have happened.

"Everything had to wait for a new election of a government with a majority free of the malign influence of unionists and eurosceptics – just like today," he said.