Ahead of her appearance at this year's Cinemagic Film Festival, Jenny Lee chats to Bridgerton actress Harriet Cains about fashion, fame and how Britney Spears prepares her for the role of Philippa Featherington... 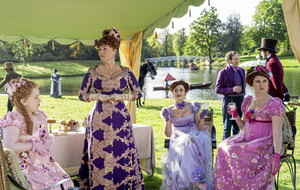 SINCE it launched on our screens on Christmas Day 2020, Bridgerton has captivated audiences with its drama, scandals and risqué romances.

The Netflix series tells the tale of eight siblings searching for love and happiness during the Regency period of the early 1800s, when social hierarchy, ballgowns and the land you owned were all that mattered.

When it comes to getting inside the head of Philippa, Cains reveals that she listens to music. But it's not Haydn, Mozart or Beethoven.

“When you are prepping a character or scene at home on your own, you can use little things to help you and then when you are on set you can use them as triggers to access that place," she tells me.

“I use music. Some scenes are more important to do that than others. It's fun.”

And what song does she use to get her ready to become Philippa Featherington?

“I feel like Bridgerton is quite modern, so it's not really necessary to transport myself into 19th century music. Sugary pop, like The Spice Girls and Britney Spears are my access points for Philippa," laughs the 29-year-old Nottingham actress, whose other credits include Hollyoaks, Doctors, In the Flesh, Safe House, Line of Duty, Vera and Marcella.

Cains will be sharing stories from the Bridgerton set and passing on valuable acting advice to young people when she visits Belfast this week to take part in the Cinemagic Film Festival.

“The only other time I've been to Belfast was back in 2017 when I was filming Line of Duty. I'm really looking forward to it," she says.

When it comes to taking advice, Cains reveals she turns to her Bridgerton mother Polly Walker, who plays Lady Portia Featherington.

“She's like my mentor and I remember her chatting about how there are chapters in your career. She told me I'm still at the beginning; I'm nearly 30 now, so that makes me feel great," says Cains.

“A lot of young people want fame. But getting too much too soon can sometimes be unhealthy. My advice is to think about your career in terms of longevity; it's a marathon not a race.”

Many who work in the entertainment industry love being in the spotlight at every chance they get, and as a result succumb to the pressure of fame. Not so Cains, who shies away from social media and credits her humble beginning, as well as her friendships, for helping keep her both successful and grounded.

“I didn't come from an art culture background. I came from Nottingham and simply enjoyed listening to music and watching the soaps. Yes, when I was a kid I wanted to be like Britney Spears. But I also happened to like acting and joined a local drama club," she says.

“When you enter into the showbiz world a little bit, you see how far removed it is from your beginnings. It's nice to be a part of that every now and again, but it's not a reason to want to do it.

“Luckily, I just found myself surrounded with the right people – ‘normal' people. It's difficult to be from a place like where I'm from, then become egotistical and go home and act differently and say 'I'm a star'.”

Cains confesses that before she appeared in Bridgerton, she had never watched a period drama.

“I never expected to be in a period drama, but here I am. It's certainly a different calibre in terms of learning the lines and the language of that era," she explains.

“Bridgerton has a very different vibe. I loved it when I read the script and I get why it's universally popular as a lot of people are able to see themselves play out through the characters.

“I love filming the family scenes. They are very strategic and mostly shot to camera, so as an actor there is so much breathing room in them.

“I'm overwhelmed by the response to it and hope it continues to enthral viewers.”

Speculation around series three revolves around the budding relationship between Viscount Anthony and Kate Sharma, and drama surrounding Penelope Featherington and Colin Bridgerton.

“We are in the middle of filming it now. I've got a couple of nice bits to film, that's about all I can say," she giggles coyly.

Whilst Cains loves bringing out Philippa's funny personality, she admits they have little in common.

“I like to think I'm a bit smarter than her, and I guess the only similarity is I've a sister,” laughs Cains, whose favourite part of being part of Bridgerton is her visits to the costume department.

The show boasts many amazing dresses, including Philippa's dress for the Diamond Ball, which was encrusted in over 14,000 crystals in four shades of gold.

“The ball dress was amazing, but it wasn't as heavy as my wedding dress. It is lovely to have people put very expensive clothes on you. They are just pieces of art," she enthuses.

“The first time I met and discovered more about Philippa was at my costume fitting. So much of your character is brought through by the costume,” adds Cains, who on average would spend two hours in hair and make-up before filming.

When it comes to her own style, she says she is “more a charity shop gal than a red carpet gal". She adores vintage clothes and her go-to leisure wear is Doc Martens and baggy oversized tops. And when it comes to dressing-up, she would wear “something slinkier”.

Although having no specific dream roles, Cains loves the challenge of playing contrasting characters and simply says that in the future she wants to “star in good dramas”.

Viewers will next see her star in the forthcoming Netflix fantasy drama series Half Bad. Based on the novel trilogy by Sally Green, the darkly comic, romantic young adult show tells the story of a witch who must defy the odds to discover who he truly is.

:: Harriet Cains will take part in a Talent Lab class for 16-25-year-olds at W5, Belfast on October 2 as part of the Cinemagic Film Festival 2022. For booking and full festival programme visit Cinemagic.org.uk.

TV Quickfire: Comedian Sarah Millican on how she enjoyed new series of Taskmaster