David Roy chats to Oliver Callan about his new BBC Sounds comedy podcast series Killing Leprechauns, in which RTE's resident topical satirist quizzes British comics on their knowledge – or lack thereof – about Ireland and the Irish... 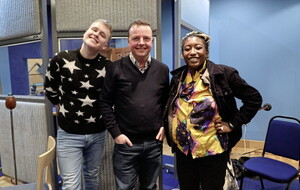 "I THINK all we want is to be noticed every now and again by the Brits, which is why we get irritated when they show their ignorance, " explains Oliver Callan when we call to discuss his new BBC comedy podcast, Killing Leprechauns.

The new six-part series finds the Co Monaghan-born satirist and broadcaster inviting a selection of up-and-coming British comedians to display their ignorance of all things Irish while also filling them in on the finer points of 800 years of 'chequered' Anglo/Irish relations and putting common Irish myths and stereotypes to the sword.

"It's not terribly scientific to try and find the level of Irish knowledge among the great British public using comedians, but it is kind of indicative," says the presenter, who's been a fixture on RTE Radio for the past decade with his popular topical satire show, Callan Kicks.

"And, to be honest, it was very stark how little they knew. In fact, they probably knew a lot less than we'd expected about Ireland. I mean, it was just very thin knowledge.

"I suppose everyone looks towards the next big superpower: the Brits look to America in a similar way that we look to Britain. As they say, Britain sneezes and Ireland catches the spittle in its eye and gets an infection. But the Americans pay about as much attention to what's happening in Britain as the British do to what's going one over here."

Indeed, even the British blunders which rile us the most don't tend to be big news on the other side of the Irish sea.

"There's always the odd time when Sky News or the BBC will 'claim' an Irish actor who's been nominated for an Oscar as British – and that drives us mad," says Callan, who's become a regular stand-in on RTE Radio 1's The Ryan Tubridy Show whenever the Late Late man is unavailable.

"Like, this year it was Jessie Buckley, who'd never set foot in England until she was in her 20s. We went through the whole cycle of us getting very angry, a big social media outcry, and then the journalist who actually made the faux pas just quietly tweeting an apology.

"But until then, the British public were completely unaware of any furore. That's kind of indicative: a huge storm happens here and they don't even notice."

He adds: "What kind of shocked me was, I would have thought everyone knew about stuff like Joe Biden's proclaimed Irishness and JFK's importance to the Irish and Irish America. But that seemed to be a complete void.

"That was a real eye-opener for me, because it made me realise, 'Of course, why would the Brits be covering the Irishness of people in America in the same self-obsessed way that we do in Ireland?'"

Killing Leprechauns features several rounds for the guest comedians to negotiate: they have the chance to reveal just how 'Proud To Be British' they feel before being tested on their 'Mick Ignorance' regarding Irish slang, customs and culture, then 'Enter The Leprechauns' finds Callan quizzing the comics on their favourite, usually highly inaccurate Irish stereotypes – we're only seventh in the world alcohol consumption ranks, for example.

'Great Britain or Hate Britain' offers up British persons, sports teams and customs to the guests who must try and guess how the subject is regarded by the Irish, before 'Sham/Rocks' gives them the chance to rate purely Irish phenomena – slang, customs, events, cultural stereotypes – from a British perspective.

"It's all coming from a happy place," explains Callan of the six-part podcast.

"We think that Britain would benefit enormously from realising how much Irish people look and stare at what's going on in their sports, entertainment, political, culture and so on. And that they might benefit learning about our customs in return."

As listeners will discover, Callan enjoyed presenting the series immensely – as apparently he knew he would from the moment the BBC approached him with their pitch.

"BBC Radio Ulster producer Mark McElroy, who is actually from Dublin and has been in the north for umpteen years, suggested it to us last year. I said, 'Oh my God, yes, I would absolutely love to do this' and so they commissioned it very quickly – too quickly in fact, because I was in the middle of doing [satirical '100 years of Irish history' review] Callan Kicks the Years for RTE.

"Because I'm so used to doing political satire in a topical way, it was nice to do something that was going to be a bit more timeless. It's all about breaking down stereotypes and bringing two very close groups of wild poetic people together.

"I mean, we're also talking as much as we can as ordinary people. So, as much as the coverage looks like Ireland and Britain and the North are all kind of fighting and [political] relations are the worst since the Troubles, the ordinary people from both islands still get along extraordinarily well."

And, if you're wondering how hard it was to persuade British comics to come on to the show to reveal their Irish ignorance to the world, apparently the answer is 'not very': "It was easy," chuckles Callan, "you tell a bunch of comedians, 'Look, we want you to do this show and you have to do absolutely no research, just bring your existing knowledge', and they all jump at it."

So, will he be back for a second series – and how might the format evolve going forward?

"I would love to do another series," Callan enthuses.

"I wouldn't mind going to Europe and almost championing some of British culture, customs and traditions in a way, because particularly in France and Germany they have a kind of a very gimlet-eyed view of Britishness. And when an Irish person goes to Europe, they're going to you 'ah, you're Irish, you must hate the Brits as much as we do'.

:: Killing Leprechauns will be available on BBC Sounds later this month