Pancreatic cancer is one of the deadliest cancers and Northern Ireland fares especially poorly, with five-year survival rates among the world's worst and 60 per cent of patients who could have had surgery to cure the disease are diagnosed too late. As Pancreatic Cancer Awareness Month continues, Armagh woman Gráinne O'Neill reflects on losing her mother to this 'secret' cancer 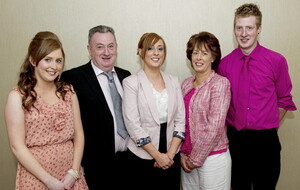 GRÁINNE O'Neill lost her mother Anne to pancreatic cancer in January 2014. Gráinne was just 21 years old, her mother 54, and the emotion and grief is still raw.

The Armagh woman recently celebrated her 30th birthday, the landmark occasion offering another painful reminder of her loss.

"The reality is, mummy and I have both lost out on the important milestones in my life. She never got to see me graduate, will never know when I get engaged, help pick my wedding dress or be there on the day I get married," says Gráinne.

"The kids I may have will not get to know their granny. I feel like I have been robbed of another 40 years of being with her."

Gráinne is one of a number of children and young people who have lost a parent to pancreatic cancer who have been taking part in NIPANC's 2022 #TimeMatters Campaign.

The local charity's campaign aims to raise public awareness about pancreatic cancer, the need to understand the symptoms and be persistent in seeking early diagnosis and treatment.

The O'Neill family are tight knit, Gráinne growing up in Armagh city with her older brother Fergal and sister Sinead.

"I'm the baby of the family. When we were born my mum gave up her job to take care of us," she says.

The event management graduate, who has also gone into local politics and serves as an SDLP councillor in Armagh, is of course grateful for the precious years she and her siblings shared with their mother.

"She lived for her kids. Those 21 years to me are worth their weight in gold. I've just celebrated my 30th birthday and I couldn't decide whether to get everyone together or not. I still feel it massively when we are all together around the table and mummy isn't there," shares Gráinne.

Gráinne's mother Anne first felt unwell at the end of May 2014 with flu-like symptoms. As Gráinne was heading off to America during her break from university that summer, she pleaded with her mum to get it "checked out".

"They said it was a kidney infection and she got some antibiotics for it. I said goodbye to mummy and daddy at Dublin airport."

But a further pain in Anne's right side, a symptom of pancreatic cancer, persisted and as Anne and Jim were supposed to be relocating to Spain at the time, she went to get the pain checked out.

"I remember it because it was around the time of the 12th of July holidays. It was then that a doctor came in to her when she was on her own and told her she had cancer and that it could be pancreatic."

"They told me she needed her gallbladder removed to prevent me from stressing out too much when I travelled, but I always knew there was something more to the story," she recalls.

"On July 13, I was met by my daddy and brother at Dublin airport. When we got home, daddy called me into the sitting room and told me mummy had cancer.

"My mum lost her mum at 22. When I walked into the hospital that day, she knew the life I was going to have without her. She knew how hard it was going to be. People think it's all about Mother's Day but it's the everyday things that really get you. Little things I want to tell her, or getting a hug from her when I come home."

Approximately 260 people are diagnosed with the condition in Northern Ireland each year, and only 1 per cent of those reach 10-year survival. Our five-year survival rate for pancreatic cancer is one of the worst in the world, ranking 32 out of 36 countries.

One of the main reasons is that pancreatic cancer is a secretive cancer that grows very quietly in the pancreas. It can be difficult to diagnose and by the time it is, surgery isn't an option.

In the early stages of the cancer, symptoms can be quite vague and may come and go. These symptoms can also be caused by lots of things other than pancreatic cancer, which adds to the confusion.

"Time really does matter when it comes to pancreatic cancer. It's badly positioned behind the stomach and the liver.

"It can be so quiet and easily misdiagnosed. Every minute really does count because options aren't there and time is so precious because of your loved one," adds Gráinne.

After inconclusive biopsy results, Anne did not begin chemotherapy treatment until September. "By that stage she had lost so much weight and was told she had four to six months to live and that the chemo would be given as palliative care," says Gráinne.

After a last Christmas together, Anne's family braced themselves for a tough new year. "Mum went for a final scan around the time of my exams in January. The news wasn't great. The pancreatic cancer had spread to her liver, lungs and then a bone in her back.

"I remember the day I helped her to get dressed to go for a blood transfusion. She was weak and I was trying to help her into her trousers but she couldn't lift her legs. I was thinking, I'm the child but here I am dressing my mum who was only 54."

Before and after her mother's passing Gráinne campaigned and fundraised for pancreatic cancer charities.

"When I turned 21 I did a run which also raised 3k. I had also found out about a woman in England who was mounting a petition about pancreatic cancer and needed more signatures so I became heavily involved in that.

"I did everything I could to keep mummy's memory alive because I wanted to share how special she was. I set up a fund, Fight for Annie, and it raised over 10k. I've had people out in purple T-shirts for balloon releases and did a trek to the Great Wall of China and have run gala balls. We've raised a total of about 60k so far."

Gráinne is passionate about raising awareness of cancer and in response has developed the slogan, The Purple Sheep of Cancer, which she hopes people will associate with pancreatic cancer in a similar way the colour pink is associated with breast cancer awareness.

"We want to establish that. The purple sheep reference is because purple sheep, like black sheep, is the forgotten one," she adds.

5 hacks to help you live longer

Ask the Dentist: Why am I so tired after dental treatment?