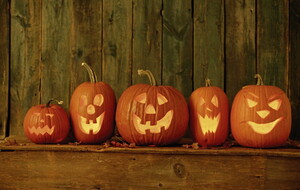 Pumpkins at Halloween is an American tradition but these big fruits are very much at home in Irish soil...

MANY of today's Halloween traditions are relatively recent additions that originated in America – they're a clear manifestation of cultural imperialism, with a postmodern twist. The practice of 'trick or treat', for example, is something I knew nothing of as a child growing up in 1970s' Downpatrick, where October 31 first and foremost meant bonfires, and with a bit of luck, a party afterwards that included dunking for apples.

It's important to note, however, that the tradition of carving pumpkins has its partial origins on this side of the Atlantic, though historically turnips were used to fashion so-called punkies and Jack O'Lanterns. Irish and Scottish emigrants are thought to have exported this practice Stateside, where people instead carved the softer and much more readily available pumpkins. Lanterns carved from turnips are a rare sight these days, whereas pumpkins – costing as little as £1 in supermarkets – are near ubiquitous at this time of year.

Pumpkins and similar fruits in the gourd family – they're not strictly speaking vegetables – can take up a lot of garden space but are very rewarding, and are especially good for getting children involved, right through from the sowing of the seeds to the carving – and even soup making and seed drying for the more adventurous

Pumpkins can grow to quite remarkable sizes in a matter of months in a process that to young and older eyes alike, can seem quite magical. If pumpkins sound like an unnecessarily large extravagance, consider squashes or other smaller gourds as an alternative, following the same basic rules as outlined below. For me, squashes make the better soup, while pumpkins provide the better seeds.

The growing process for both gets underway in mid-spring, when those distinctive asymmetrical oval seeds are sown indoors. You can sow direct a little later in a sheltered spot but initially under cover of some description, such as a homemade plastic bottle cloche or plastic sheeting, yields greater success.

As you'd expect from something that gains weight so quickly, pumpkins are both thirsty and hungry. The soil in which they are to be grown must therefore be fertile, with plenty of homemade compost and well-rotted manure added. It's recommended creating a hole the width and depth of a spade to accommodate the young plants, adding a general purpose fertiliser as you back fill.

Even if you don't plan to break any records, plenty of space is required, so leave a gap of up to 6ft between each plant. Large containers and grow bags can also be used, though the demand for water will be greater.

As the fruits develop, keep them away from damp soil by resting them on a piece of slate or a tile. Once they begin to swell it's recommended giving them a regular feed with high potassium liquid fertiliser, such as tomato feed or liquid seaweed. As they reach maturity, the skin colour will become redder and they'll be ready to harvest from late summer, when the stem connecting the fruit to the plant begins to crack.

Once picked, your pumpkins can be stored but it's best to leave them in a sunny spot for a week or so first, to cure the skin. After that they'll last up to three months if kept in a dry, cool spot indoors. Best varieties include 'Cargo', 'Charmant' and the for especially big fruits 'Hundredweight'.

Gardening: Love rhubarb? Save on grocery bills by growing your own