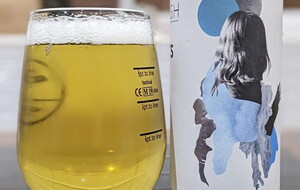 Blue Ghosts from Whiplash achieves a depth of flavour

However, brewing a good lager is far from easy and many micro-brewers struggle with it. There's really nowhere to hide when it comes to lager, so you need to get it spot on as you can't mask things with a high ABV, rich roasted malts or a fair bit of barrel-ageing.

I picked up a bottle of Spade Town's Long Face Lager a couple of years ago and while admiring their ambition, felt the beer itself didn't quite hit the mark.

Spade Town have undergone a considerable revamp since then, including a move to new premises in Craigavon and canning most of their beers.

That includes Long Face, which returns as a much-improved 4.5 per cent lager. Coming in a 330ml can, it pours a golden colour with a generous fluffy white head.

There's plenty of carbonation, which helps to elevate the subtle flavours and gives the beer a nice smooth mouthfeel. There's a little bit of sweet, biscuity malt up front before that gives way to a refreshing, lemony vibe and a little herbal hint too.

It's crisp and clean but with a decent depth of flavour that makes it memorable.

The other lager I sampled this week comes from Dublin-based Whiplash. Blue Ghosts is a 5.2 per cent German-style Pils.

Again, the flavours are subtle but they've gone for traditional German hops, which always bring a bit more to the party.

Sold in 440ml cans, it pours a bright, clear golden colour in the glass and has a minimal white head.

There are slight herby aromas but the first flavour you get is of the honeyed sweetness of many German lagers.

The herby vibes comes from the use of the traditional Hallertau hops while they've also chucked in Hersbrucker and Saaz, which all combine to lend this beer a pop of citrus and a little hint of spice.

It also achieves a depth of flavour, which is difficult to do in a lager and that complexity makes it stand out.