Eating Out: Tzatziki - A taste of Greece on Botanic Avenue 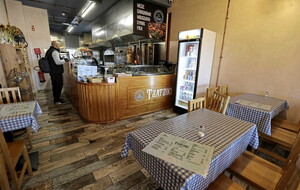 FOR as far back as I can remember, meat has slowly rotated between the dry cleaner’s and the Oxfam book shop on Botanic Avenue in Belfast.

For most of that time it rotated late into the night, ready to meet the demands of the young revellers, students, both actual and in spirit, heading home towards the university area in need of some absorbent material in their stomachs.

So the meat found itself stuffed into bread or strewn over chips, drowned in sauces and packed into polystyrene tubs, squeaking under the scrapes of plastic forks.

Way back when I was much younger but not quite old enough to know better it was a regular, apres sophisticated cocktail bar (actually sticky indie disco) lifesaver. A mixed kebab.

Why have one mystery meat when you can have three, in equally mysterious sauces? It did the job, but it wasn’t good. Some fast food can stand by itself in the stone cold sober light of day. This absolutely could not.

I can’t make any claims about the two or three different occupants of the space over past 20 years, but now the rotating meat comes courtesy of Tzatziki, a Greek restaurant a world away in quality from those late nights, and filling a long puzzling void in Belfast’s food landscape.

The simple wooden tables with blue and white vinyl tablecloths, the ever-present waft of smoke from the grills and that meat, and an appropriate soundtrack give you the notion you could be somewhere with the Mediterranean or Aegean lapping behind you, rather than the grey Belfast afternoon we’ve actually escaped from.

There’s a lot on the menu, although we’re told that not everything is on today. To be honest, narrowing down the choices is no bad thing.

“How much would you recommend,” we ask, working hard to give the impression it’s to make sure we don’t end up with too much, while really trying to avoid under-ordering at all costs.

The always welcome, though frankly redundant, “it depends how hungry you are” is the green light to work through some of the smaller starter plates and add some of that meat sizzling away.

They like a good platter here, which is always useful in the reviewing game as it’s an easy way to get your arms round as wide a select of the menu as possible without looking like a massive gorb.

But Tzatziki’s generosity means that’s not necessarily possible. “A lot of people end up bringing food home” apparently. You can see why.

Four of the small mezze plates are a snapshot of the eastern Mediterranean. The herb-laden beef meatballs taste fantastically fresh and the discs of falafel – a dry, mouth sealing disaster waiting to happen most places – are bang on point.

The hummus is good but the mtabbal dip is even better with the slightest hint of smoke from the aubergine bringing you back again and again to dredge your flatbread through it.

We’re sharing based on previous advice and for £13.50 get something approaching a dustbin lid piled high with chicken, lamb, flatbread, salad, tzatziki and chips.

The chips are perfunctory. They feel like they’re there to satisfy our local compulsion to expect them with everything. They stand out among every thing else by not being particularly good. More bread would have been far preferable.

But one pointless portion of chips doesn’t deflect from the rest of the plate.

The salad is sadly missing olives but there’s plenty of salty feta and the crunch of cucumber, peppers and the fresh blast of tomato to balance the pile of meat and carbs it’s sitting next too.

Finally – the meat. Rather than the stuff for their shawarma and gyro kebabs, it’s the souvlaki, chunks of glistening chicken and lamb, and a deeply spiced, sweet, smoky – it’s all smoky, it’s all great – lamb kofta.

There’s no baklava or bougatsa on today, which is a shame as either pastry would have killed with the excellent Greek or Arabic coffee.

The view out the window may be rain bouncing off a 7A bus rather than the sun bouncing off and clear blue sea, but Tzatziki is a lovely spot, with the all-too-rare bonus of being smack in the middle of the Venn diagram of genuine value and just being plain good.

To pay we go to the counter. There we see spanakopita, cheese and spinach peeking out the golden edges, and that slowly rotating meat, looking so much better that it did back in the day.

Long may it turn.