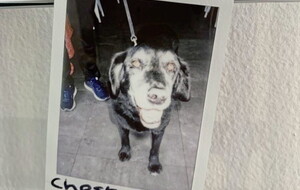 Chester on the 'Bare Pups' wall inside Bare Bun

ASKING the fussiest eater in the world to review a restaurant is akin to asking someone who watches little or no TV to write about their favourite shows. Yet here we are.

There is very, very little that I will eat. On the rare occasions that I do head out for food, I'll be in a panic for the days leading up to it, hoping there is something simple on the menu. No fish, no red meat, no nuts, definitely no mushrooms. If someone suggests going somewhere 'fancy', my heart sinks.

Not content with my already-limited options, I gave up meat around about the same time as the lockdown began two and a bit years ago, which is a bold move for someone who also does not like the taste of most vegetables.

However, it has not been that much of a struggle so far, as there are plenty of vegetarian and vegan options that I enjoy.

As this is my first ever eating out review, I ask readers to bear with me. The review is unlikely to be as adjective-laden as such writing seems to be. I usually find food is either tasty or not.

There is nothing fancy about it, nor is the menu particularly extensive. It is good, simple, comfort food with no frills. And perhaps best of all, it is dog friendly, so my elderly pal Chester was able to come along - and have his photograph taken and put up on the 'bare pups' wall display.

The place is 100 per cent vegan, so there is no worry about potential contamination. It also appears to be aimed at both vegans and meat-eaters. If you were not told what you were eating, you'd really have no idea it was meat free.

The portions are quite generous and it is easy to fall into an 'eyes bigger than belly' trap. Having been a couple of times previously, I chose to tread carefully on this occasion, especially as I wanted to try the dessert.

There are about eight main courses, which are predominately made up of plant-based chick'n or a meat-style smashed patty. Most are burgers - single or double - while there are also a few smaller bites including a classic meat-free hot dog, three different types of corndogs which I'll try next time, crispy goujons and a chick'n wrap. Aware that the meat-style can be a problem for some - as it is close to real meat in terms of texture and taste - all burgers can instead be made with fried oyster mushroom.

We ordered the hot chick'n and BBQ chick'n. The first includes a fried chick'n patty, jalepenos, fried green pepper, sriracha mayo and, as if it was not hot enough already, some sweet chilli. It was tough to eat with one hand while trying to control a suddenly starving and drooling dog with the other. It was flavourful and packed the punch I hoped it would.

The BBQ chick'n came with hash brown, garlic mayo, and a tangy BBQ sauce among other toppings. Again, it requires both hands.

While for most people, the burger alone should be more than enough, the menu has a few different fries options, skinny or waffle, that come with various seasonings. We opted for skinny fries with spicy salt and waffle fries with dairy free garlic butter. Both were great but the latter were superb. You can load up your fries into a meal as well - I'd highly recommend the salted chilli waffle fries.

For dessert, there is only one option, but it is top quality. A heated, gooey, vegan brownie with dairy-free ice cream and either a Biscoff or Kinder topping. The brownies can be taken to go instead if you don't fancy all the extra toppings.

Overall, the speed of service was quick, the cost reasonable and the food great. It also has a kids' menu which includes hot dogs, a cheese burger and a grilled cheese sandwich.

If you are vegan, vegetarian, pescatarian, someone who still craves meat or even a meat eater willing to give something new a try, then Bare Bun will not disappoint.