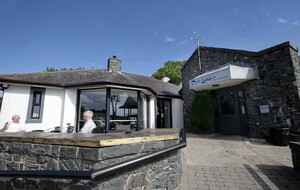 Daft Eddy's has a glorious location on Sketrick Island near Killinchy. Picture by Hugh Russell.

MY chair in Daft Eddy's had its back to the huge windows, so I can safely say the meal was a good one without being swayed by the gorgeous view of Strangford Lough.

With a location like this, on Sketrick Island a short causeway's hop from the mainland just past Killinchy, you could probably get away with sending out not much of anything rather than the killer chips, perfect squid and desserts full of generosity and reassurance they do here.

But, apart from one mis-step – the second of the day involving cattle – Daft Eddy's could be anywhere and worth a visit. It just happens to be in as pretty a spot as you could wish to find.

We arrived to the huge room, with it's pre-hipster exposed brick, wooden beams and rowboat fastened to the ceiling, a little late thanks to a mass movement of cows along a country road. A phonecall to explain was met with the cheerful, relaxed response that marked the service once we arrived. It did no harm to be put at ease as just about every Friesian passing by stared out the car as if to say 'I dare you to order beef for dinner'.

More of that later.

First up is an excellent bowl of parsnip soup, sweet with the sort of curry warmth that felt like it's straight out of a chip shop – a huge compliment. A lovely bowlful.

The goat's cheese salad is as classic as you could want. Some twang, but mainly bland comfort from the balls of cheese, lifted with a little spice from the ginger breadcrumbs they were rolled in, sweet, earthy beetroot and a candied crunch of the walnuts.

The steak pie is one of those that would get called a pot pie in America or a casserole with a pastry lid by the sort of person who set up the petition to Parliament in 2015 calling for its description as a pie to be made a criminal offence. More than 5,000 people signed it.

These can still be satisfying things, but this pastry hat was obviously cooked separately then plopped on top, soaking up nothing of the good stuff you want in pie pastry. There are a lot of chunks of good meat in there and the gravy is rich and substantial, but there's nothing else. A few mushrooms, or onions, or anything would have been welcome.

It wasn't bad, and there was an awful lot of it, but the buttery, scallion-heavy champ and little pot of carrots, mange trout and more parsnips were better.

Maybe it was karma after looking all those cows in the eye.

The mild regret was boosted by seeing one of the alternatives, a glorious-looking plate of Kilkeel scallops with samphire, peas, bacon garlic, and tarragon and lemon butter, arriving at another table like a conquering fishy hero.

We're in the middle of a lough after all, and the salt and pepper squid only emphasised the pie folly.

Huge chunks of cephalopod with just enough bite and barely a chew came inside a batter that was crunch then gone. Both salt and pepper were up front and along with the thick, chip-shop perfect chips it was the art of deep frying at its best, with a forceful aioli to dredge everything through.

Whatever you order, you're definitely not getting off the island underfed, however many courses you go for. Desserts would make sure of it on their own. And they're also, pound for pound, the best part of the meal.

The raspberry and white chocolate roulade crunches, cracks and collapses in all the right places. Chunks of white chocolate make it a particularly sweet thing, but the mixed berry sorbet weighing it down is a smack a fresh zing.

The same simple, pleasing trick is going on across the table too.

The thick, sweet, fragrant lemon posset would have been a bit much by itself, especially with the blob of cream on top, but between the two was a sharp layer of berries laced with balsamic, and a couple of butter-loaded discs of shortbread on the side.

We roll back across the causeway, take in the view – and hope the cows don't know we're coming.