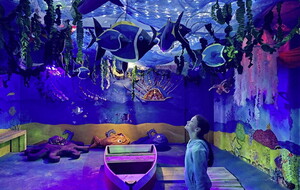 Journey beyond the sea at Newry's Imaginarium

FAIRY houses, trolls, hidden rooms, a spaceship, an island and a giant library; these are just some of the features of Newry’s Imaginarium – a purpose built area for children to use their imagination to transport themselves to another land.

Aimed at newborns to 11-year-olds, the Imaginarium is the creation of Sticky Fingers Arts, the children's art organisation behind the Giant's Lair mythical land at Slieve Gullion Forest Park.

First opened in 2017, the re-imagined and bigger Imaginarium opened this summer following lockdown, offering even more possibilities for open-ended and creative play.

“Since first opening we have been very busy delivering programmes on a day-to-day basis. Lockdown gave us time to take a step back, reflect and redevelop what we were doing. And it gave the team time to focus on creating quality artistic experiences for children,” says chief executive Grainne Powell.

She believes that post-pandemic, play is more important than ever.

“Lockdown has caused little ones to miss key milestones in their development and a regression of language skills. There is play deprivation across Ireland and until children are given opportunities to play it has an impact on their learning, their mental health and wellbeing," she explains.

“We believe that every child has the right to engage in the arts and creative play and the Imaginarium provides a safe and accessible space for children of all abilities.

“We also want to relay to both children and adults that play doesn’t need a script or set of instructions. You are only limited by your imagination.”

For a child's-eye perspective, I brought my nine-year-old daughter Abigail along. And whilst there were plenty of toddlers crawling around and exploring toadstools and giant teacup houses, there was still plenty for older children.

Atmospheric water and bird sounds, projected lights and a waterfall add to the sense you are stepping into the land of make belief.

Whilst I merely saw giant-sized colourful bookcases, Abigail’s observation was more profound. “He’s not happy – he’s gobbling up the books," she remarked.

Combining creative and creative and engineering skills, the possibilities are endless. Abigail was particularly proud of the train she made, but also enjoyed joining with other children in making a giant marble run.

The tunnels and secret passageways are perfect for games of hide and seek – so much so that staff have the key to an alternative entrance to the secret room in case they have to retrieve any lost children.

An enthusiastic four-year-old summed the place up perfectly when he asked me: “How did you get this place built? It’s sooo cool.”

The answer is that the team of eight artists created the Imaginarium by hand, mainly through up-cycling. For example, the book cases are made from offcuts of donated wooden floors and the books are painted onto blocks of wood.

“All the materials we use in the children's workshops are recycled and reused. Glitter had to go because it doesn't biodegrade,” adds Grainne.

Imaginarium doesn’t shy away from giving children an important environmental message about the harmful impact of plastic upon our sea life, with their newly decorated ocean roof, whose ceiling nets feature both fish and plastic.

Rather than being instructed on how to make a certain painting or model, children are free to roam - exploring sand and water trays, a play-dough table, musical instruments, dress up or the many craft materials.

“You create whatever your imagination allows. I can help, but it’s you who decides what you make,” the arts facilitator Caroline told Abigail.

After drawing with paint sticks, she gravitated towards a box containing pieces of material and before I knew it Caroline was helping teach her to sew a fish mobile.

Creativity and life skills all in one... And Abigail’s spark of imagination continued the next day when she delved into our recycling bin to construct her own fairy houses.

The Imaginarium has been designed to evolve and change and there are plans aplenty for the community arts organisation.

The spaceship will soon get a further upgrade with a new control panel incorporating a space game, developed by local students from Newry SRC.

Later this month the sensory rooms open, featuring a number of activities aimed at children with additional needs. Already Imaginarium offers quiet time on a Wednesday and in September the family autism evenings will return on the last Friday of the month.

Also starting in September is Storytale Adventures on Saturday morning’s when local celebrities will take their place in the Imaginarium’s giant storytelling chair and read from their favourite book.

Next month also sees the start of evening workshops for teenagers on sound engineering, filmmaking and animation, and the centre is excited to open their Magic Box Theatre in October.

The 200-seat venue will be the first dedicated children’s theatre in Northern Ireland and will play host to a regular programme of local and international theatre and performing arts.

:: The Imaginarium is located in Upper Edward Street, Newry. It is currently open Tuesday to Friday, 10am-5pm. From September it will also open on Saturday’s from 10am-4pm. For further information visit StickyFingersArts on Facebook.