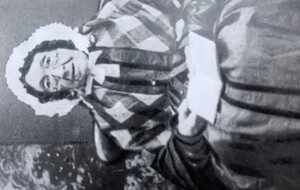 IN my simplistic view of heaven, Mary Ann McCracken, who died in 1866, must have welcomed with open arms Baroness May Blood MBE, a woman who began work at 14 in the Blackstaff Linen Mill in west Belfast and actively supported campaigns for legislation for men and women to receive equal pay and for an end to sex discrimination.

She was 84 when she died last month. And I reckon Sadie Patterson would be there too.

They were cut from the same cloth. Sadie went to work at Ewarts' Mill on the Crumlin Road in north Belfast in 1918, also at the age of 14, and was appointed the first full-time official of the textile branch of the Transport and General Workers' Union in Belfast with special responsibility for women workers.

These are remarkable individuals who have each left their legacy on all our lives, whether we know it or not.

'Remarkable' also sums up historian Dr Éamon Phoenix who died last Sunday. Much has been written about him and the wealth of knowledge he carried in an exceptional mind.

It wasn't only his knowledge, it was his enthusiastic way of delivering his history, slightly breathless so you were sitting on the edge of your seat as he guided you through the years; he even brought politics to life.

I made programmes with him and socialised with him on occasions and they are memories to cherish.

LOOKING BACK TO THE FUTURE

It's so important to document memories and no more so when it comes to the Belfast Charitable Society.

In a book launched earlier this month president of the Society Sir Ronnie Weatherup explained that from its outset in 1752 the Belfast Charitable Society was invested in looking after the welfare of the people of Belfast, just as it does today.

"As the town continued to grow, the Society became increasing concerned about issues such as health, migration and within a global context, slavery and revolution.

"This new book, The First Great Charity of this Town, published to mark our 270th anniversary, helps us understand the role the Belfast Charitable Society played in addressing these issues in Belfast and beyond."

In her foreword, former President of Ireland Professor Mary McAleese writes of the women associated with the work of the Society, specifically Mary Ann McCracken, who she said dedicated her life to addressing social issues and with her committee was to the fore of providing education of the town's poorer classes.

I always think of Mary Ann as the backbone of the distinctive building sitting in North Queen Street overlooking the town but there were many more, mostly men, who developed an idea to open a poor house.

The Society was formed in 1752 by a group of 19 merchants, burgesses (councillors) and a vicar. The group met at the George Inn, which once sat at the corner of North Street and John Street, now Royal Avenue, to discuss how they could tackle poverty and help the poor of Belfast.

As a result, the Society was established and when funds were raised the Poor House, now Clifton House, was built and opened in 1774.

This collection of 11 essays explores the social history of Belfast from the foundation of Belfast Charitable Society through to the point at which Belfast emerged as a major industrial city at the end of the 19th century.

In her introduction the book's editor, Olwen Purdue, Professor of Modern Social History at Queen's University Belfast, gives an overall assessment of the Society and those who were involved in its history including the fact that, as WH Crawford wrote at the time, in the late 18th century Belfast had very few town gentry but "substantial members of leisured folk of independent means".

These were merchants, proprietors and public figures, mainly Presbyterians, who increasingly challenged the dominance of the Irish Protestant Ascendancy that prevented both Protestant dissenters and Catholics from fully engaging in the institutions of state.

Prof Purdue continues: "These radical ideas saw their earliest manifestation in the development of Volunteer activity. Originally raised by Ireland's landed gentry as a local militia to protect the country from invasion, some Volunteer companies inspired by revolutionary events across the Atlantic quickly turned their attention to campaigning against the subservient position of the Irish parliament held in relation to Westminster and for free trade between Ireland and Britain." Sound familiar?

This is a book to savour and with many more tales to tell.

:: The First Great Charity Of This Town is published by Irish Academic Press and is available from Clifton House and local book stores, priced at £24.99.

OPENING DOORS ON THE PAST

Coming right up to date, families can be part of Clifton House's past on December 4, 11 and 18, at 11am on each day, when guides will take you back 250 years.

They will share how children once celebrated in the Poor House, bring you on a visit to the nursery where they were schooled and the basement where women and children worked on cotton spinning, and let you see the infamous 'black hole' where those who were more naughty than nice ended up. There will also be a chance to join in some craft making, as well as a Christmas tree, hot drinks and shortbread. It all adds up to a fascinating Sunday morning experience. Book now.

:: For further information on this and many more events, as well as the philanthropic work of the Belfast Charitable Society today, visit belfastcharitablesociety.org.

Ask Fiona: I'm struggling to cope with caring for mother-in-law

Jake O'Kane: The DUP's Assembly boycott has consequences for our health service and our sick