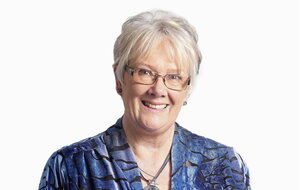 WHEN I was just a little girl I had to endure plaits or, as we called them, pig tails. Every morning my mum brushed my hair and braided my locks and I hated it.

Then came the years of maturity. As a teenager of 13, I decided to take matters - or pig tails - into my own hands. We were holidaying in Portstewart and I noticed a barber shop in the town.

One day, on pretence of going to the beach, I presented myself to the owner and asked for a short back and sides. He smiled sweetly and apologised, with tongue in cheek, said he couldn't possibly without my mothers consent.

"But my mother sent me," I told him holding out my pocket money. I was not popular when I arrived home with my hair in a brown paper bag, although when they got over the shock my mum and grandmother liked the new look and that look has remained with me to this day.

Ask anyone how important hair is to our self-esteem. It's not known as your 'crowning glory' for nothing, and women have always primped and primed. Men, too, want to look well groomed and elegant. The short back and sides are no longer the 'in' look, it now varies from 'skin fade' to a well balanced top-knot as well as the more conventional hair cut.

I was told that when it comes to barbering, Seán Lawlor is the man to contact. I met him in his traditional Cambridge Barber Shop and Shaving Room on Belfast's Lisburn Road.

It was like walking into an Edwardian gentleman's establishment, the Shops Act 1912 prominently displayed on the wall along with photographs of clients through the years, including one gentleman on his 100th birthday.

As promised by Seán he didn't pay from that day until he died; his youngest client was just nine days old, and had to have his hair removed for a Nigerian baptismal ceremony.

Old mirrors, custom built basins big enough and deep enough to wash the whole head - face and all - four 'stations', plus a shaving room. This is where Fey wet-shaves his customers, using what used to be known as a cut throat razor in the days of Sweeney Todd but in Fey's hands it's a delicate act, with a fresh blade every time for safety and hygiene.

It's a long way from his counterpart in ancient Egypt where this job was done with oyster shells and flintstones so it was no wonder this work was entrusted to top tribesmen.

Beards signalled powerful rulers, a sign of intellect and strength. Only important people attended the barber - philosophers, poets and warriors. However, beards went out of fashion when Alexander the Great ordered them be removed as the Persian army pulled down his men by their facial hair and then killed them.

But barbers retained their popularity when they began to work with medical professionals and were known as 'surgeon barbers' - hence the red and white poles still seen on some shops - blood and bandages...

Seán is very proud of his staff - nine in all, divided between his Lisburn Road and Stranmillis Road premises - who can count three generations amongst their clientele, and yet he admits this famous award-winning empire actually came about by mistake.

"I've been working since I was eight - lemonade runs, stacking shelves in a local shop and I was a paper boy for a while. When I was 16 I wanted to leave school so I went job hunting," he recalls.

"It was a Friday when I saw a notice in Hair Traffic's window looking for apprentices; I walked in off the street, started on Saturday and, with a trainee wage of £15 a week, school was a thing of the past." And he hasn't been out of work since.

After qualifying, Seán went to London to further his career but it wasn't for him and he decided to come home to more courses in hair dressing and a placement in a ladies salon to learn the ropes.

But, by mistake he was sent to a barber's shop and, as he says, the rest is history. He joined Michael O'Hare on St Valentines Days 16 years ago and has worked in the Cambridge shops since; he became a partner in the business and is delighted that his youngest son, Rhys, has taken up the scissors and is working in his Stranmillis Road shop.

Seán Lawlor fights for what he believes in and took on Stormont over two enforced closures during the pandemic and queried this when other establishments remained open, rattling the cage and making his point; he refused regulations that customers had to book rather than walk in, and expressed his views on The Nolan Show and life returned to some normality.

He was back to scissor haircuts, flame hair-singeing and applying top brands to nourish and condition the scalp and hair including the traditional Bay Rum originating in the West Indies and described as a zesty masculine fragrance created by sailors who steeped bay leaves in rum and, once matured, splashed it on to attract the ladies. It's now used in traditional barber shops around the world.

The Cambridge is a talking shop, a social hub just like barbers have always been since the days of Egyptian noblemen. Terminology may have changed but still the older generation like the traditional cut, younger ones follow film stars and Love Island idols.

Indeed, according to research carried out by Lynx deodorants, 18 to 35-year-old men in Belfast spend 45 minutes preening themselves and fashioning their hair before going out on the town.

We women still outstrip them - it usually takes a leisurely makeover of longer than 45 minutes for us to approve of what we see in the mirror - often over a glass of wine...

Jake O'Kane: I just love the smell of burning tyres in the morning - and turf fires, Old Spice and Jeyes Fluid...