Singer-songwriter Joan Armatrading tells Alex Green about her beginnings in Birmingham and the passion that sustains her today... 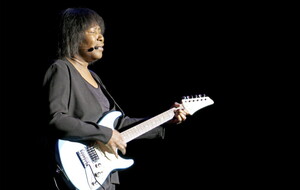 JOAN ARMATRADING has enjoyed a remarkable 50 years in music.

From her arrival in Birmingham from the Caribbean island of St Kitts, to the release of her self-titled breakthrough album in 1976 and all the years since, she has remained steadfast in her independence.

Unlike many artists, the singer-songwriter behind timeless songs such as Drop The Pilot and Love & Affection has achieved longevity through consistency and gentle evolution.

“There's an element of fate and being in the right place at the right time,” she explains, ruminating on her success.

“There's no planning for that. You literally can't plan for that. You can't say, ‘Well, I'm going to be the best in the world and sell out every single stadium'.

“You cannot legislate for that. So that's one aspect.

“You have got to have some kind of talent to make people be interested in what you're doing.

“That applies to all of us, no matter who it is. No matter if you are Taylor Swift with all the top 10 of Billboard being your songs, or Desiigner. It doesn't matter. It's luck plus an element of time.”

Armatrading, now 71, is marking the milestone with a live album, Live At Asylum Chapel, documenting a performance during lockdown, and a book of her lyrics being published by Faber & Faber.

She was seven when she moved to Brookfields, then a district of Birmingham, to join her parents, who had come over a few years earlier.

At 15 she left school and worked in the office at the Rabone Chesterman factory, a company who made spirit levels and rules. At 16 she performed live in Birmingham for the first time.

Her debut album, Whatever's For Us, came in 1972 and what has followed in the intervening years has mixed folk, jazz, blues, soul and rock.

It seems the right time to reflect on a remarkable career. Does she feel the same?

“It does have a lot of value. The value is that I've lasted this long,” she offers with a warm yet steely laugh.

“It's not everybody that has a career that lasts for this length of time.

“I feel very lucky that I'm here 50 years later in 2022 and people still want to talk to me about my music.”

Although her debut was release in 1972, her breakthrough came four years later with her self-titled album, which contained the hit Love & Affection.

“I always say that I knew Love & Affection would be liked,” she muses. “And I knew it would have some success if people heard it.

“But unless people hear it and like it, unless they join in, it's not going to be a success.

“People are not going to be talking about Love & Affection, that came out in 1976, it is not going to have the success and longevity that it has had just because of me.

“Once you get the people joining in, that's when it becomes what it needs to become, whether you're talking to me, the Beatles, Taylor Swift or whoever.”

This independent spirit has been central to her longevity.

Since 1986, she has been producing herself in the studio and since 2003 been playing almost all instruments on her records.

“It's not a control syndrome,” she says with a chuckle. “It's not that I feel that I've got to be in control.

Armatrading says she has been asked to write songs for other artists in the past, but politely declined.

“I love listening to other people do it. It's wonderful. It's really interesting. But again, you need to do what makes you feel really good.”

Where does she find inspiration from now?

“I'm alive. All you need to be is alive because when you're alive, you're aware.

“You're looking at stuff, you're meeting people, you're seeing things, you are involved in things.

“That's it. It's not that complicated to me.”

Around 1988, she wrote a song called The Shouting Stage after watching a heated argument between a couple in an Australian restaurant that resulted in the man storming off, leaving the woman in tears.

“I thought to myself, ‘What got them to the shouting stage that they are actually in public giving us this performance?'

“I can bet you I am the only one who went home and wrote a song about it.”

She also tells me about Mark Knopfler, frontman of Dire Straits, who wrote one of their biggest hits, Money For Nothing, after a throwaway exchange with a shop clerk.

“I bet he was the only person in that appliance store who went away and wrote something about it,” she adds.

“As a creator that's what you do. You observe. You are present. You can see those things that would creep in and make a song. That's how it works.”

Her musical tastes have always extended beyond those heard on her records – she tells me her recent listening has included the American rappers Wiz Khalifa and Desiigner.

“There's actually so many people but I'm not listening to any of them and thinking I need to be like this person. That's not what I'm doing.

“I'm just listening to them and enjoying them. Because they have done it. I don't need to do a bad version of them.”

Her career has been full of pioneering moments.

In 1978, Bob Dylan invited her to play alongside him at Blackbushe Aerodrome in Hampshire – the only woman on the bill among Eric Clapton, The Band and Graham Parker.

Five decades in, does she have any regrets? The resounding answer is no.

“I don't know how it would have turned out if this and that had happened.

“I might not have lasted for 50 years if I hadn't done this or regretted that and tried to do that.

“Who knows? I'm happy with the way things have gone.”

Live at Asylum Chapel is out now on BMG. The Weakness In Me: Selected Lyrics is available now.

Mary Kelly: Hancock's half hour of I'm a Celeb fame a reality challenge

Jake O'Kane: The DUP's Assembly boycott has consequences for our health service and our sick