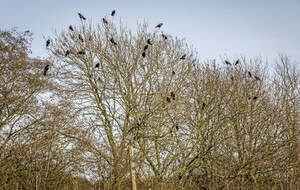 Crows congregate around a Buzzard.

NOW in early November, we begin our journey through the gloomy, shadowy days of early winter, days our ancestors prepared for in those harvest celebrations and sacred gatherings at the festival of Samhain, summer's end.

Autumnal hues gradually give way to unclothed woodlands and leaf carpeted floors, as diminishing days induce a lengthy veil of darkness. Of this time, Emily Bronte writes in Spellbound, "The night is darkening round me/ The wild winds coldly blow".

During this period in the past, I've often been visited by the overwhelming fog of melancholy, a misery from which I struggled to emerge. Layers of torment suffocated feelings and emotions, while engagement with the outside world was all but extinguished. Over the years, various interventions, good friends and contact with the natural world,all helped clear the anxious haze and steer me on a pathway to relative wellness.

Thinking of this lately, I reflected on the significance of light in those end of summer celebrations by our forebears, through their bonfires, torchlights, and new hearth fires. Like Diwali, the recently celebrated Hindu festival of light, and other winter rituals across the world, the focus on light symbolises victory of good over evil and the certainty that light follows dark. Light has been a powerful symbol of hope and joy in the stories of the world's ancient cultures.

Although many species among our animal and plant world now enter a period of rest or torpor, like hedgehogs, frogs and bats, there are also numerous species which remain active through these shorter days, their colours and sounds providing us with much needed 'light and hope' as we engage with the world.

Just a few days ago, I watched two hooded crows harassing a circling buzzard for several minutes, near a local hillside. The raptor tumbled downward, extending its sharp talons in defiance, before turning and pulling away on the light winds, leaving the crows in its wake.

Soon after, the distinctive sound of whooper swans overhead revealed a party of 15 or so birds, arrivals here from their Icelandic summer breeding grounds, now probably seeking the lush fields of Fermanagh's Upper Lough Erne or perhaps Bunduff Lough by Sligo's coast. Eala glórach, the noisy swan can choose from an abundance of suitable places along Ireland's coasts and inland waterways for its winter stay.

This month also welcomes scores of other wildfowl, including brent, greylag and barnacle geese, wigeon, goldeneye and long-tailed ducks as well as wading species like godwits and greenshank, all to be found at our shores and wetlands.

The charcoal coloured brent goose referenced in ancient tales of Cúchulainn is a small chunky bird which winters here after nesting in the boggy Arctic tundra. Our light bellied variety, a relative of the larger barnacle goose, is found in large numbers, especially around Strangford Lough but also along all our coastline.

Northern and eastern winds will soon carry waxwings, fieldfares, and redwings here to feast on berries and fallen fruits, their streaks of red and white visible on darkened days. Bird tables too come alive now, as noisy visitors squabbling over nuts, seeds, and fat balls, show bright and varied tones: the goldfinch's striking yellow flash, the blue-tit's azure crown, or the orange, blue-grey shades of chaffinch.

Blackbirds, thrushes and lively sparrows enjoy regular soakings in the shallow birdbath, while raucous corvids wheel around in evening skies. Flocks of long-tailed tits barrel through the trees as goldcrests whistle their high-pitched notes from the tall evergreens, lights in the darkest heavens.

November, with all its possibilities, no longer holds the same fear and dread it once did.

Eating Out: Slim Chickens might not change your life, but it is rather good

Travel: Washington DC is more than just monuments and museums