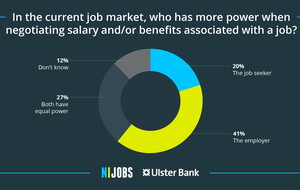 THREE in five workers in Northern Ireland are currently looking for a new job, according to a survey for hiring platform NIJobs.

Salary - the bigger the better - remains clearly on top of the wish list for the 1,500 respondents.

But other benefits likely to persuade them to apply for a job include health insurance (favoured by 28 per cent), extra annual leave entitlement (27 per cent) and perks including free parking, staff discounts, a welcome bonus and free food.

And when it comes to who has more power around negotiating salary and benefits associated with a new job, it seems the power has largely swung back from the employee to the employer - except in sectors like cyber-security, financial services and engineering, where highly skilled candidates continue to be coveted and can often name their price.

NIJobs.com believes 2023 will be a year of transition for the recruitment market as businesses and job seekers continue to navigate through the cost-of-living crisis.

And while there has been a softening of the labour market in the north following record highs, the competitive landscape around hiring is likely to continue.

Sam McIlveen, general manager at NIJobs, says: “Last year ended on a high with a large volume of jobs available across many categories, and competition for talent was fierce, with businesses having to adapt quickly to the changing nature of the recruitment process and demands of the employee.

“A complete shift in the traditional office environment meant employers had to offer not only increased flexibility, but also above-average salaries and other benefits to attract and retain the right talent.

“The cost-of-living crisis is motivating 61 per cent of those surveyed to look for a new job. Salary comes in top of the list, whilst flexibility and hybrid models fall back to third and fourth place. But once in a role, 58 per cent prefer hybrid working, and 72 per cent say it’s helping them manage costs more effectively.”

He added: “With such importance being placed on salary, it’s interesting to note that 70 per cent research salary from the outset, 71 per cent are comfortable negotiating it with a potential employer and 41 per cent will ask about it during a first-round interview.

“Attraction and retention continue to be an important area that employers must consider. Competition for talent will still feature this year, but undoubtedly, the true impact of inflation hikes will have taken its toll. Business operating costs will be a priority and may overtake salary increases and bonuses offered to staff.”

Ulster Bank chief economist Richard Ramsey said the data indicates that the number of advertised vacancies on NIJobs fell by 8 per cent between the third and fourth quarters, though number of positions listed in the October to December period is still close to 90 per cent above the corresponding quarter prior to the pandemic.

“Health remains the largest employment category with 1 in 12 of all job listings followed by IT (7.8 per cent), catering (7.4 per cent), management (6.8 per cent) and social care (6.1 per cent). The number of health roles advertised, while down on Q4 2021’s peak, is over 10 times its pre-pandemic level, and given the challenges facing the National Health Service, filling these roles represents a huge challenge.

“Despite widespread industrial action, the arrival of a recession will see the balance of power slowly return to the employer. The pain of the cost-of-living crisis, higher mortgage rates and the cost-of-doing business crisis will increasingly become apparent in the labour market with job losses and rising unemployment. The unemployment rate is expected to rise above 4 per cent but stay below 5 per cent - which compares to a peak of over 8 per cent after the global financial crisis.”

Mr Ramsey added: “With inflation set to outpace wage growth for most of the year, poor staff morale and a wave of industrial action looks set to be a given. Many employers will be walking a tightrope of trying to retain staff but remain profitable or maintain service levels.

“Staff shortages and low morale appear to be most acute within the NHS. According to NIJobs.com, vacancies in the wider health sector are running at over ten times the level they were at pre-pandemic. This is likely to get worse before it gets better, and we are likely to hear more stories of medical staff emigrating to the likes of Canada, New Zealand and Australia.

“The challenge for many sectors of the economy is getting staff morale back to pre-pandemic levels. That will be a long haul and is easier said than done. Morale will be the watchword for 2023.” 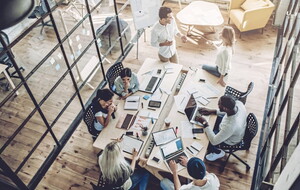