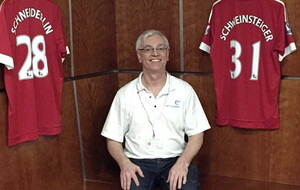 Colin Edgar in the dressing room at Old Trafford.

A COUNTY Down company is helping the stars of the World Cup rapidly recover in the blistering heat of Qatar.

Colin Edgar’s company is now making around 100 products each year from a manufacturing base between Dromore and Dromara.

Speaking to The Irish News, the Co Down man revealed how 20 years ago, he left a successful career in finance to launch a start-up to manufacture the northern hemisphere’s first equine spas for horses.

“Equine spas were totally new in the northern hemisphere. I had sold my business in 2001 and was looking for something to do,” he said.

The business soon evolved into advanced systems for athletes.

“Whenever we started to look at the ice baths, which was around 2007, we focused on maximising the therapeutic effect," he said.

The product CET developed harnessed jets to target calves and hamstrings and utilised a high concentration of salt water for infection control and to increase the density of the water.

One of CET CryoSpas’ ice baths in the Lusail Stadium at the World Cup in Qatar.

“It’s a totally different experience using one of our products to being in cold water.”

But Mr Edgar recalled the biggest issue at the time was convincing an industry used to spending a few hundred pounds on plastic containers and filling them with ice to invest upwards of £13,000 on his product.

“You had Champions League teams using wheelie bins as ice baths, there was so much ridiculous stuff.

“We were lucky. The first prototype we made, we loaned to West Ham.”

“We now have ten premier league clubs, we have AC Milan, Bayern Munich, Wembley Stadium, we have eight at Wimbledon and we’re now supplying Qatar for the World Cup,” said Mr Edgar.

Such is CET’s reputation in the industry, it does virtually no marketing, with all calls inbound.

His biggest issue is now one of capacity to meet demand.

“We’re at capacity at the minute, we’re running out of space which is the big issue for us.

The experience of Rafa Nadal and Novak Djokovic at Wimbledon saw both contact CET for their new respective tennis academies.

But it’s not just sportspeople who are reaping the benefits.

“About half the people using them have nothing to do with sport. They’ve maybe got depression, pain management, they have autoimmune conditions.

“It’s about wellness, akin to sea swimming and we have the Wim Hof craze.”

“We’re hoping to use the kudos we have developed in elite sports to target the home market as well,” added Mr Edgar.

“We’ve now got what we call the CryoHome, which is cladded in red cedar like a sauna. We’re just launching that now.”

Although around a third of the price of the professional product, Mr Edgar said the home spa will still comply with commercial sanitation standards.

“You cool the palm of the hand and it increases work capacity. So if you’re bench-pressing in the gym and cool your palms before the second set, we’ve found the user can do more repetitions,” he said.

“The improvements we’re seeing are unbelievable.”