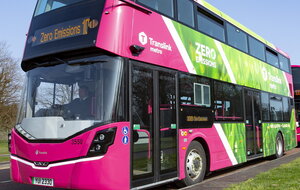 ANOTHER 100 battery-electric buses have been ordered from Wrightbus for Translink, the Infrastructure Minister has announced.

The contract with Ballymena bus-maker Wrightbus has been signed ahead of the midnight deadline for Stormont’s caretaker ministers to vacate their offices.

Translink said 40 of the new buses will be allocated for Ulsterbus services, with another 60 being added to the Metro fleet in Belfast. The order includes a mix of single-deck and double-deck vehicles, which are due to enter service by the summer of 2024.

The Department for Infrastructure has already ordered dozens of battery-electric and hydrogen powered buses from Wrigthbus, now owned by Jo Bamford.

Translink has already rolled out 77 new battery-electric and 23 hydrogen buses in Belfast this year.

Sinn Féin’s John O’Dowd, who currently holds the Infrastructure portfolio said: “Enormous strides have already been made to ‘green’ our public transport network with £98m invested by my department since 2020 for the supply of over 140 zero emission buses for the Translink fleet and the associated electric vehicle charging and hydrogen refuelling infrastructure.

“I am delighted to announce a further investment of £88m, which will deliver an additional 100 zero emission buses and EV charging infrastructure for our public transport network.

“This investment will be fundamental in creating cleaner and greener transport as we seek to tackle the climate emergency and improve air quality across the north.”

“We would like to thank the minister and his department for this investment which enables us to deliver the benefits of zero emission technology to more areas across NI, with 40 buses being allocated to Ulsterbus services and 60 being added to the existing zero emission Metro fleet in Belfast.

“These new buses will run on sustainably sourced 'green' electricity and offer the latest standards in comfort, quality and accessibility.”

Translink said the single deck buses being supplied will be the new Wrightbus battery-electric model which will offer an extended journey range on a single charge.

Wrightbus chief commercial officer, Ben Werth said: “We’re immensely proud that an additional 100 of our world-leading StreetDeck Electroliners and GB Kite Electroliners will be on the streets of Northern Ireland.

“At Wrightbus, we’re not only enabling operators to build zero emission fleets fit for the future, but we’re also supporting jobs and the wider green economy across Ireland and beyond.

"This latest investment will help to make a huge impact in reducing emissions across the country."

Translink said 40 of the new buses will be allocated for Ulsterbus services, with another 60 being added to the Metro fleet in Belfast.