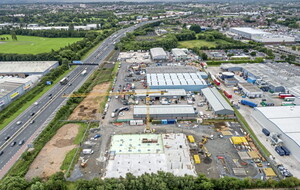 Aerial view of the foundations being installed for U Store It's new Belfast site.

IRISH self-storage company U Store It is preparing to open a major new site in Belfast as part of a multi-million-pound expansion north of the border.

The five-storey mega unit, just off Kennedy Way in west Belfast, is expected to open by the end of the year, offering between 1,500 and 1,600 storage units for consumers and small businesses.

The investment manager is paying €104 million (£90m) for U Store-it’s existing sites in Dublin, Belfast, Cork and Waterford, according to The Times,

Documents filed with the Irish Companies Registration Office indicate Heitman will pay another €20m (£17m) for four development assets, including the site in west Belfast, which is still under construction.

The new unit under construction along the M1 close to Milltown Cemetery will offer more than double the number of units, with users able to obtain round-the-clock- access via pin code.

The Dublin-based firm originally secured planning approval for the project in 2008, but major building work only commenced in recent months.

How the new storage facility will look internally.

Karen Brennan, U Store It’s head of sales and business development, said while the concept of self-storage remains a relatively new concept on the island, it’s already huge in the US and Australia.

“The business model is the flexibility,” she said. “There’s no lease, and you can just roll it on month-to-month.

“It’s attractive to the online retailers, start-ups and in the case of the Belfast market, for mainland UK businesses looking to have a satellite operation in Northern Ireland.”

Self-storage is also being increasingly used by residential customers, particularly among prospective house-buyers involved in a property chain deal, or in cases of deceased householders.

“Customers will use anything from two weeks to 15-20 years,” said Ms Brennan. “Any and all reasons apply.”

Ms Brennan said major expansion is now on the cards in both the Republic and Northern Ireland, with expansion beyond Belfast likely in time.

“At the moment, the priority is trying to get the new site up and running and then looking at opportunities outside of Belfast to see what’s available to us.

“There’s definitely a demand. Because in Ireland it’s such a young sector, the biggest problem we would have is awareness.”

Aerial view of the foundations being installed for U Store It's new Belfast site.

The business is anticipating considerable demand for commercial storage space in the north in the post-Brexit era.

“There’s an awful lot of commercial usage for self-storage, because there’s such a premium for commercial space,” she said.

“From a commercial point of view, the selling point is there is no lease. You have a business address, but don’t have to be on site to collect or wait around for deliveries all day.