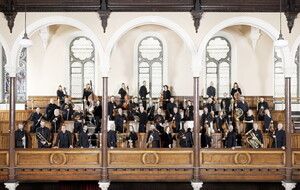 The Ulster Orchestra at a performance in May this year

THE Ulster Orchestra has appointed Auveen Sands as its first female chief executive.

She moves into the role at the end of October, taking over from current managing director Richard Wigley, who has been with the Orchestra for more than six years.

Auveen Sands, who spent more than 15 years in corporate banking, joined the Orchestra as head of finance and operations in January 2014 at a time when the organisation was in financial difficulties due to severe public funding cuts, and she was a key member of the team which helped saved it from closure.

Since then she has worked alongside Richard Wigley on the strategic development of the Orchestra, and has been a driving force in improving its financial stability.

She said: “I'm delighted to be taking over from Richard and thankful that he is leaving the Orchestra in such a strong position. I look forward to leading the Ulster Orchestra at such an exciting time in its development, given its outstanding performance at the BBC Proms and its office move to Townsend Street to reside in the heart of the community.”

Richard added: “It is with the greatest pleasure that I hand over the reins to my close colleague Auveen, who is a rare individual combining as she does business acumen, creativity and a special connection with people.”

“She brings great experience and a real insight into an orchestra that she will have seen and helped transform in recent years under the inspirational direction of her predecessor Richard Wigley. We look forward now to seeing Auveen build on this legacy and continue to take the Ulster Orchestra to even greater heights.”

Established in 1966 as the north's only symphony orchestra, comprising of 63 internationally respected musicians, the orchestra and currently led by Milan-born music director Daniele Rustioni, one of the most compelling and sought-after young conductors of his generation.