With the West End production of Joseph and the Amazing Technicolour Dreamcoat in Belfast this week, we catch up with its star Alexandra Burke 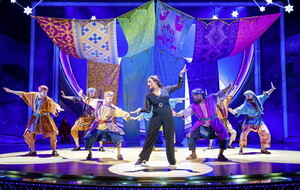 ALEXANDRA BURKE shot to fame in 2008 when she won the fifth season of The X Factor aged just 20. Her debut single, Hallelujah, sold 105,000 copies within 24 hours, becoming Christmas number one of that year.

The Londoner has since made a name for herself on the stage, in productions such as The Bodyguard, Chicago and Sister Act.

Having just given birth to her first child in July, the 34-year-old is back on the stage to reprise her role of The Narrator in Tim Rice and Andrew Lloyd Webber's new production of Joseph and the Amazing Technicolor Dreamcoat, which she played in The London Palladium.

::What can audiences expect when they come to see the show?

It's such a vibrant, colourful and exciting show that you can't help wanting to join in with the songs, clap along or get up and dance at the end.

:: You're returning to the role of The Narrator, having played her at the London Palladium last summer. What do you most enjoy about the role?

It's an important role because she's telling the story, along with Joseph and Pharaoh and the rest of the cast, cast, but I'm quite giddy when I play her. It's the only role I've done so far where I've felt I can just be myself. What people are seeing on stage is really just me - my personality shining through because I'm quite a goofy person and I play her in quite a goofy way. What you see is me having a laugh on stage, telling a beautiful story and singing some lovely tunes.

:: The Andrew Lloyd Webber/Tim Rice score is full of great songs. Do you have a favourite to perform?

The opening number, Prologue (Some Folks Dream), is one of my favourites simply because of the message behind it. It's telling kids to find their dreams and just go for it, and it's just me and the kids performing it. It's an important message to put out there, not just for the kids but for adults as well.

:: Joseph is a big contrast to The Bodyguard, which you starred in when it toured to Belfast in 2019. Was that part of the appeal?

Yes it was, then I found out there hadn't been many black Narrators and that was the selling point for me. I thought, ‘I want to be that representation for young black girls to be able to see themselves in that role'. One of the kids in the show last year said, ‘So I can be The Narrator one day when I grow up too?' She was a young black girl and it blew my mind that she'd gotten some inspiration from me doing the role. That was the key thing for me - being part of an iconic show and representing people of colour.

:: You came to fame on The X Factor but was theatre always part of the plan?

It's been more of a nice, happy accident if I'm honest with you. I never, ever thought about doing theatre after The X Factor because my mind was so set on music. I was only meant to do three months in The Bodyguard at the Adelphi Theatre and that turned into five years of non-stop theatre work. And gosh, it's been wonderful. Music will always be my number one but it's been amazing to be able to train my voice in a different way and build up my stamina. While recording what will be my fourth studio album I've realised that I'm more confident with my singing than ever before and I put that down to all the incredible roles I've played over the last seven years.

:: The tour is in Belfast this week. Does the city have any significance for you?

I love Belfast. I've got great friends there so it holds a special place in my heart. I've already done the Titanic Belfast museum and this time I want to do the Game Of Thrones tour.