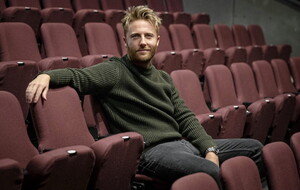 THE boys are back in town: Dundonald Liberation Army (DLA) stalwarts Davy 'The Venezuelan' Taylor and John 'Horse' McCracken will stage their latest show of strength at The MAC in Belfast next month with Lockdown DLA – the third instalment of writer Stephen G Large's comedy saga centred on Dundonald's most foolish freedom fighters.

Actors Matthew McIhinney and Matt Forsythe return to the roles they originated in 2019's hit Dog DLA Afternoon – in which the DLA's attempt to stage a bank heist went farcically wrong – and the online 2020 Christmas-themed sequel Jingle All The DLA, which found Davy (McElhinney) and Horse (Forsythe) connecting via Zoom to share their experiences of the Covid pandemic.

Running at The MAC from September 14 to 18, Lockdown DLA picks up on some of the themes explored in the latter: forced to isolate together in Davy's flat in early 2020, the dimwitted duo tackle the global pandemic head-on, from panic-buying bog roll and attempting to bake banana bread, to only going outside to purchase essential items like fresh supplies of Buckfast tonic wine and an inflatable hot tub.

It's the latest live show featuring the characters which first appeared in spoof news items featured on Large's hugely popular Dundonald Liberation Army Facebook page, through which the Dundonald-born writer has been gently mocking paramilitary 'culture' and the foibles of everyday life in Northern Ireland since 2015.

Birthed in the outraged aftermath of Lisburn City Council's rude 2015 power grab from long-time caretaker Castlereagh Borough Council, the DLA take a pair of crossed SuperSoaker waterguns as its crest and have a list of 'demands' that include "a public declaration by Lisburn City Council that it is the right of all the people of Dundonald to decide the future of Dundonald" and "compulsory under-age drinking to re-commence in the Moat Park, effective immediately".

Arguably Dundonald's most successful export since journalist and presenter Colin Murray (or former Miss Great Britain Gemma Garrett at the very least), to date Large has self-published two hit DLA books, including the 2016 Kindle comedy chart-topper Dundonald Liberation Army and its Top 10 follow-up novel A Dog DLA Afternoon from 2017, the latter subsequently adapted for the stage.

According to Large, having already worked with McElhinney and Forsythe on the previous DLA instalments has made his job as a writer easier on their upcoming third go-around.

"It's so much easier, because when I'm sitting on my laptop having imaginary conversations in my head I can 'hear' their voices and 'see' their facial expressions as I go – and that really, really helps," says the 41-year-old father of three, whose other work for the stage includes Three's A Shroud and Carol's Christmas.

However, it seems that the ongoing read-through and rehearsal process for the play is still an essential part of the staging process, as Large explains.

"We did a read-through a couple of weeks ago at my house with the draft I had at the time and there were just a couple of things that sounded like my voice, not theirs, if that makes sense," says the playwright, who has also written for BBC NI comedy vehicles Late Licence and Soft Border Patrol and its online sketch series Tight Shorts.

"It was more the writer having a rant as opposed to writing for the characters, and those things get picked up when you come to read-throughs and rehearsals. There will also be things in rehearsals that the guys will flag when they go to act it out, like maybe I will have put in some sort of stage direction that isn't working, so we have that sort of relationship and flexibility there [to change things].

Indeed, the Lockdown DLA project benefits from a creative shorthand and camaraderie developed between the trio over the past few years.

"They are both great to work with – and we're friends as well, so it's not just a working relationship," explains Large, who is currently developing a dramatic screenplay titled Normal Lives set amid the explosion of ecstasy culture in the wake of the Good Friday Agreement.

"I've worked with Matthew McElhinney now for years, including on Three's A Shroud which we took to the Waterfront Hall in 2017 and 2018. And the first time I saw Matthew Forsythe was in a smaller production of A Night In November in The Devenish [directed by McElhinney]. He was fantastic in that so I got speaking to him on the night and we cast him in Dog DLA Afternoon at the Opera House."

As for the plot of their latest DLA outing, Large says that it's "my take on the pandemic – but moreso".

"I sort of go in two-footed on a lot of people," he continues.

"No-one's safe – even Captain Tom gets it. It was a lot of fun to write and there's a lot of observations about the government's handling of it on a local and national level, and also human behaviour: the initial reaction was a real eye-opener with all the panic-buying, people fighting in the streets over toilet rolls and shaving their heads after being stuck at home for five minutes. I went the opposite way, I was like a late-Beatles John Lennon by the end of it."

As you may have gathered, his work on the Dundonald Liberation Army has proved a useful safety valve for venting Large's frustrations with certain aspects of everyday life here. While some take to social media to rant about what irks them, it's all grist to the DLA's mill.

"I use these characters as my vehicle," he tells me.

"I try to take everything that crops up and look at it from both points of view through these characters. It is a lot of fun because you wouldn't get away with saying some of the things that these guys say in real life.

"The whole concept of the DLA was initially to poke fun at the political situation here, paramilitarism and the abuse of the Disability Living Allowance. The DLA have the ideals of the republican paramilitaries – they want an Independent Republic of Dundonald – but they have the characteristics of the loyalist paramilitaries circa 2000.

"So it's sort of an equal opportunity offender in that regard. There is no agenda there other than to rip the p*** out of everyone equally. That's proper satire to me."

And, as a life-long Dundonald resident, Large is ideally placed to offer up satire with an authentic local flavour.

"I was born here and I've lived here for 40-odd years now," he comments.

"I've moved round different areas but I haven't managed to get out yet. But I haven't had any problems – everyone sees it for what it is and no-one is taking it too seriously. I take the p*** out of a lot of working class things, but it's all stuff that I have experienced – I used to take my PE kit to school in a plastic carrier bag.

"Not a lot of people could put a face to the page or pick me out of a line-up, and I'm pretty happy with that. But anyone who does know it's me, they know I'm not punching down. And I hope that comes through in the plays."

:: Lockdown DLA, September 14 to 18, The MAC, Belfast. Tickets and showtimes at themaclive.com