As Peter Corry celebrates 30 years in the entertainment industry with a new show celebrating the best of the musicals, he chats to Jenny Lee about the highlights of his career, his plans for the future and why all ages should not be afraid to step on stage 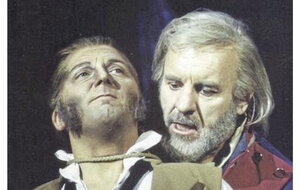 AS Peter Corry marks the milestone of 30 years in the music industry, the singer, producer and artistic director is looking forward to celebrating the joy of music with a new show featuring a host of hits from musical theatre.

He promises a show which is the perfect "antidote to all the doom and gloom" that exists in the world at present, and one which thanks his audience "for being so supportive over the years".

"I wanted to do something that reflected on what had been a big part of my career, which was the musicals obviously. To get the chance for the last three decades to turn your hobby into your job has been fantastic," says the 57-year-old, who lives in Greyabbey, Co Down.

Winning the BBC/RTE talent show, Go For It, in December 1992 proved to be the stepping stone that led Peter from Belfast to London's West End, starring in musicals including Les Misérables, Sweeney Todd and Chess.

"The final went out on Sunday December 22 and on Monday an agent from London phoned me. Within the first couple of auditions I was offered a role in Les Mis," says Peter, revealing he initially turned the opportunity down.

"She said: 'Look Peter, we could take this, but I honestly think that we need to spend the next couple of years not being stuck in one show, but learning more about the business by doing smaller, shorter contracts'. At the time I was taken aback, but I trusted her and she was totally right."

His reward just a couple of years later was one of the principal roles in Les Misérables – that of Inspector Javert, the officious policeman, who pursues the central hero Jean Valjean.

The artist went on to set up his own production company, which has evolved over the years, and which he now runs with his wife, the choreographer and theatre producer Fleur Mellor.

He produces various projects in Ireland, including his popular Christmas at the Cathedral concerts, as well as events all over the world.

When asked about his career highlights, Peter explains there are too many to choose only one.

"If you ask me about performing on stage, I'd be hard pushed to choose from performances in the Royal Albert Hall or the MGM Grand in Las Vegas, or unique and memorable moments like singing with 10,000 people in Inner Mongolia or to an orphanage in Mozambique, but for ambitions coming true I think I'd have to go for being on stage in the West End in my favourite musical, Les Misérables," he says.

"With my producer hat on, I also return to Les Mis. I brought what was at the time the largest production in the world of Les Misérables in Concert to Belfast. There was a choir of 1,000 and performers from all over the world -that was a truly incredible experience."

Peter is also proud of his role as artistic director of the Belfast School of Performing Arts (BSPA), where he takes a hands-on role.

"Any Saturday I'm free I'm out visiting the schools. I love nurturing young talent because I see the benefits of performing. Working in a team is so important, but to know that you can stand on your own two feet and be on stage is so empowering," he explains.

"When they sing or act for the first time, when they pluck up the courage to perform on stage, all those little moments are really huge."

The licence for the youth production of Les Misérables has been unavailable to youth groups for a number of years now, but as soon as it was re-released this month, BSPA jumped at the chance to produce the show this summer at Belfast's MAC theatre, with Peter in the director's chair.

"Our summer youth projects are absolutely one of my favourite projects in the year. I love the intensity of putting on a show in such a short space of time and I love working with the young people and seeing their confidence soar as the days progress but I have to say, of this particular production I am even more excited."

Some of the young people Peter has worked with have gone on to become professional artists and to perform on stage beside him.

Thank You For The Musicals, which will take place in a number of venues in the north during February and March, features a team of six singers with whom Peter has worked in recent years.

His biggest challenge was selecting the song list. "I could have had four different versions of the show, but I believe I've achieved a good balance," he promises.

"There are ones I have performed that are signposts through my last three decades. But there are also favourites from the likes of The Phantom Of The Opera, The Rocky Horror Picture Show and Mamma Mia! and a few songs from new musicals as well."

These include Hamilton, Moulin Rouge and Six. "It's quite a clever musical - it's a bit tongue and cheek and a bit of fun as well," says Peter, about Six, quickly adding: "I won't be singing that one."

And his favourite Les Misérables song to perform?

"It's a show that just really is packed with great emotional, big ballads, heart and spirit. Of course there is Bring Him Home (which he sang at George Best's funeral in 2005), but there's one at the end of the first act, called One Day More, which is just fantastic."

The father-of-three believes you're never too old to perform, and has a long-term desire to put on a show featuring a cast of over 65s.

"Sometimes it's harder for people of a certain age to feel comfortable on stage. Many people over the years had great fun performing and it's something they should still get the opportunity to do."

Having worked for seven years in the civil service, Peter's own singing career didn't take off until his mid-20s - though he's grateful for the upbringing he had in east Belfast, where his father, brother and himself all played brass instruments.

He only had a handful of singing lessons, but studied French horn and euphonium at Belfast School of Music – a grounding which still helps him to this day as a musician.

"I do think my breath control comes from playing euphonium," adds Peter, who in his youth sang in a number of rock bands – Off The Wall, One Foot on the Floor and the Stool Pigeons - doing covers of everything from Meatloaf and Elvis to Phil Collins and Simply Red.

After 30 years of performing and producing, Peter has no intention of slowing down, with plans for a massive summer event, which he's keeping under wraps for now. He is also looking forward to taking his The Showman Is Coming production to the Netherlands.

Whilst he has no desire to be tied to a West End performing contract again, he doesn't rule out having his own musical up in lights in London in the future.

"I'm not sure whether I'd like to write one or not, but I'd love to be involved in producing my own musical and getting it on its feet.

"I do love the combination of working on a project and not always being in it. Certainly, if the right project came along I would love to be involved in putting it on the stage and seeing what can be done with it."

The new Riverdance or On Eagle's Wing, I suggest? "I'm not sure about that," laughs Corry. "But I would love to be part of something that makes an impact and will stay around."

Ricky Warwick on the Troubles, why the north has more in common with Scotland than the Republic and new Black Star Riders album

Blur drummer Dave Rowntree: The most interesting sound on the radio happens in between the stations