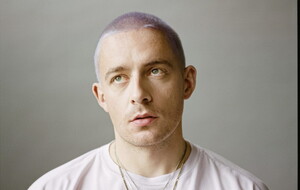 Sonder is the second studio album by Dermot Kennedy

THIS summer Dermot Kennedy played gigs around Europe on high streets and in public squares.

The shows were an attempt by the Irish singer-songwriter (30), to recapture the early days he spent busking for tips.

While these shows were a little different – he now needs security and the crowd know all his lyrics by heart – they were important in sending a message.

“I have put a lot of effort into reassuring the people in my own life and fans of my music that I haven't changed as a person,” he says.

“That's why I was playing the sets around the world this summer, busking and stuff, because it is nice to connect with people.

“Sometimes you will play to 10,000 people and you can only see the first few rows,” he adds with a laugh.

The singer and guitarist, from Rathcoole, Co Dublin, developed a thick skin playing the streets of Dublin as a 16-year-old.

He has told of how someone once threw a carton of milk at him mid-performance.

But the past few years have seen him go to number one in the UK and his home nation with his debut album Without Fear and open for Canadian star Shawn Mendes on his Wonder world tour.

In May and June of this year he played nine shows at outdoor venues across Ireland, selling more than 110,000 tickets.

It seems his heady mix of everyman pop, glossy hip hop and trademark gravelly voice is here to stay.

However, his new globetrotting lifestyle has meant a separation from the things that inspire him musically.

This feeling inspired the name of his second album, Sonder, the realisation every stranger you pass in the street has a life as complex as your own.

“My sister sent it to me years ago and at that time I didn't really have anywhere to put the word,” he offers.

“I didn't have a song to attach it to. Without Fear was already the name of the first album and so I didn't have any place to put this word.

“As a person I've always had this sense of wonder, driving through small towns and seeing the lights come on in big tall buildings.

“I really have always been fascinated and loved building stories in my head about people I don't know, imagining what they're going through and their story and what their ambitions might be, if they're having a good day or a bad day.

“It's always been fascinating to me so to be honest, the idea of Sonder just fits really well.”

Sonder was coined in The Dictionary of Obscure Sorrows – not an ancient text as its name suggests, but a book born out of a YouTube channel aiming to fill holes in language and give a name to emotions we all feel but don't have a word for.

The word also describes how Kennedy would like to be as a person.

“This career really forces people to become obsessed with themselves, and it's not something I'm trying to do,” he says.

Kennedy recorded this album in New York, a city where he says he felt both “inspired and ambitious”.

He also felt more confident this time around, and the music reflects that – the emotions are more pronounced and the production clearer and more refined.

His song Kiss Me was inspired by F Scott Fitzgerald's semi-autobiographical 1934 novel Tender Is The Night, while he wrote One Life after going to see cult LA musical Cages.

Kennedy has been open about his struggles with anxiety and imposter syndrome.

And while these themes are still present on his second album, they are tempered with optimism.

“It's funny to me because while Kiss Me might sound definitely more optimistic and more upbeat and all that stuff, it's definitely one of my darker lyrical ideas.

“It's just nice. You get to frame things in certain ways. And I think if the music is going to sound more upbeat, it's important for me that there's some depth in the lyrics.

“I'm always determined not to write in a way that's fully sad.

Uncommonly, Kennedy is inspired as much by sports stars as by his follow musicians.

Aside from reading, football is a way he reconnects with home while on tour.

“Sport has always been a massive inspiration. I'm always in awe of the amount of character they show.

“Moments where people display massive amounts of valour and pride and all that kind of stuff.

“I find that oftentimes a lot more inspiring than music.”

Kennedy's first album dealt with his anxiety. So, has this grown or diminished as his audiences have swelled?

“I wouldn't say it's made it worse or better,” he says after a pause.

“All that stuff was internal for me so it's not necessarily made it worse or better by what I do now.

“What's important for me is knowing who I am outside all of this – having a very clear idea of who I would like to be and how I'd like to feel if in five years I don't exist in terms of the public.

“I want to be content and comfortable with who I am as a person, instead of as an artist or a celebrity.”

Sonder by Dermot Kennedy is out now.