As Disney's live-action reboot of Pinocchio arrives on our screens, Tom Hanks talks to Danielle de Wolfe about why the beloved 1940 animation was ripe for a remake, how storytelling has changed over the decades and why he found the process mentally taxing 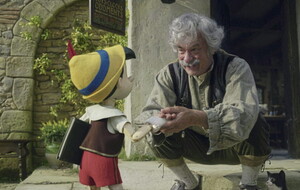 THE classic cartoon animation Pinocchio is one of Walt Disney's most beloved creations - and one that Hollywood royalty Tom Hanks reckoned was ready for a 21st century remake.

The 66-year-old star is quick to note his character is "not that far" from the historic Italian figure fans know and love.

"We have a responsibility to not just change things for the sake of changing things," explains Hanks.

That being said, the critically acclaimed actor is quick to point out "you can't just make a real-life version of what the animated film was".

"It has to be deeper. And it has to have more baggage on it. Right from the get-go, you have Geppetto in his own stew, so to speak, and it's not a happy stew," he says, adding: "Walt Disney understood that the dark aspects of fairy tales are very important to the storytelling apparatus that greets both young people and old people."

The new film is written and directed by fellow Academy Award-winner Robert Zemeckis, whose work on Who Framed Roger Rabbit - another live-action offering - tops his list of credentials.

Zemeckis and Hanks have also crossed paths as part of the Bafta and Academy Award-nominated film Cast Away.

Released in 2000, the project quickly found itself achieving cult status. Raking in more than $427 million at box offices worldwide, the duo, on paper, look to be a recipe for success.

"Bob [Zemeckis] is one of these film-makers who cannot do something that has been done before," says Hanks.

"He always has to do something where he can monkey around with the creative process of doing it, and he's never not challenged me with some sort of task that is brand new to the filmmaking process."

Pinocchio is but the latest in a slew of Disney modernisations - from The Lion King to Aladdin - that depart from the hand-drawn figures viewers have grown to know and love.

But as with any technological advancements, an increased level of complexity poses issues for both the actors and animators.

Describing his and Zemeckis's working partnership as "a fabulous challenge", Hanks admits the director's way of working is "a stretch for the acting process".

Elaborating on his point, the actor describes the complexity of the green-screen scenes he was required to imagine, noting at times the overwhelming nature of the task at hand.

"On our second or third day there, my brain just got exhausted," admits Hanks.

"I said, 'Bob, can you just give me a minute in order to put all these mental images in my head and in the right place?'

"I learned long ago working with Bob that unless you're extremely well versed in the technological things that are going to happen after the fact, it can really screw you up."

The film stars 13-year-old Benjamin Ainsworth as the voice of Pinocchio, Joseph Gordon-Levitt (500 Days Of Summer) as Pinocchio's guide, Jiminy Cricket, with Academy Award nominees Cynthia Erivo (Genius) as the Blue Fairy and The Sopranos star Lorraine Bracco as Sofia the Seagull.

Noting the "really clever" nature of Walt Disney's work, Zemeckis reflects on how the visionary American animator focused on stories that were "pretty much impossible to do as live action movies".

"Pinocchio was a natural for that. It is one of the most, if not the most, beautiful animated features that was ever made," says the director.

As if to emphasise the scale of the challenge, he also points out an additional conundrum currently facing the film industry.

"It's very tough to find enough people to actually work on your movies these days," explains Zemeckis.

"We have a very serious shortage of digital artists in the world - and everybody is making movies with digital effects."

Setting the scene for this new instalment, Zemeckis also notes Disney's 1940 animated release was already a "vast departure" from the original source material.

An Italian tale in the truest sense of the word, Disney's creation drew from Carlo Collodi's 1883 children's book, penned in the city of Pescia. Originally titled The Adventures Of Pinocchio, the fantasy novel detailed the mischievous adventures of a wooden marionette boy and his father.

"There was a different sort of pacing in movies 60 years ago than there is now," explains the 70-year-old director.

It is a view seconded by Hanks, who highlights the way in which key elements of the storyline fail to align with present day societal norms. With Geppetto sending his young son off unaccompanied as part of the original Disney adaptation, the actor highlights the unbelievable nature of such a scenario - an additional reason to update the tale.

"I think in the original movie, there's a jumping to conclusion that everything is going to be OK. But I don't think we could do that in this day and age," says Hanks.

Hanks says that diversity in modern films is the "hallmark of our social and professional responsibility" and that it is important for them to "reflect the times" in which they are made.

He said there was "no reason" why big roles should not be played by people of colour and that the filming process was done in an "improved way... because of who we are now".

"I think it is important to reflect the times in which we are making the movie, with increased diversity which I think is the hallmark of our social and professional responsibility," he said.

"There's no reason for the Blue Fairy not to be played by an African-American actor... so throughout the course of making the movie we were constantly aware of how it was better in an improved way just because of who we are now.

"If we were gonna go back and make it shot-for-shot, cast-member-for-cast-member the same, I think that would be boring.

:: Pinocchio is on Disney+ now