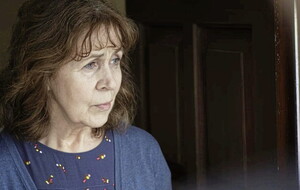 'GENTLE comedy' is a fine and often under-served cinematic genre, mainly because – to paraphrase David St Hubbins – it requires film-makers to tread that perilously fine line between inspired (Local Hero, Gregory's Girl, Hear My Song, Paddington) and insipid (too many to mention).

Thankfully, with Róise & Frank, writer/director team Rachael Moriarty and Peter Murphy have created a charming, heartwarming and proudly as Gaeilge addition to the idiom which, while it may be dismissed by some heart of stone types as 'slight', is sure to tickle the ribs and moisten the eyes of most other cinema-goers – especially those with a soft spot for man's best friend.

It's a tale of a heartbroken Co Waterford widow, the titular Róise (Bríd Ní Neachtain), who still isn't over the death of her beloved husband Frank – not the titular Frank, as you'll discover – even after two years of mourning. She's become a recluse spoken of in hushed, sympathetic tones by fellow locals in the Gaeltacht na nDéise town of Ring, glimpsed only when she's forced to venture out for supplies.

Róise passes her lonely days watching old videos of the local hurlers Frank once coached all the way to finals glory, thus cementing his status as a Local Legend. Then, at night, Róise retires to bed to listen to her late love's old voicemail greeting before turning out the light.

Thankfully, that all changes with the arrival of Frank (the titular one, played by terrier/lurcher cross Barley in an auspicious feature debut), a hugely handsome stray dog who turns up on Róise's doorstep one morning and refuses to leave her alone.

Following a couple of spooky occurrences, Róise takes a notion that her new four legged friend is actually her late hubby re-incarnated: she duly names him Frank, fashions a collar out of one of his old belts, and before long the pair are out and about for walkies, enjoying steak dinners and cooked breakfasts at the dinner table and snuggling up to each other in bed (Frank remaining respectfully/mercifully above the duvet) like it was old times.

Naturally, Róise's son Alan (Cillian O'Gairbhi), the local GP, is slightly alarmed at this turn of events. He's a quiet, sensitive sort pained by living in the shadow of his late father's 'some man for one man' reputation and struggling to help his mum conquer her prolonged grief: his daily text message of "how are things?" has clearly not been cutting it.

Róise's not the only one delighted by four-legged Frank's arrival: her neighbour's son Mikey (Ruadhán de Faoite) is a talented hurler but too shy to show off his abilities in front of the cliquey school team. However, when Frank displays a natural affinity for the sliotar during Mikey's solo practice sessions, he and his canine 'coach' soon become the talk of the clós na scoile.

Can Frank help Mikey conquer his shyness and become his school's star player in much the same way as the charismatic/enigmatic pooch has rejuvenated Róise, minus the worrying spectre of inter-species romance?

Not if Rósie's dog-hating neighbour with unrequited amorous intentions Donncha (Lorcan Cranitch) has anything to do with it, a plot strand which sets up a cameo from Arracht star Dara Devaney as a local dog warden.

You'll find no spoilers here, but let's just say that, by the end of Róise & Frank, almost everyone we've met has experienced an emotional breakthrough and is left in a better place than where we first found them. Exactly what you want from a film like this, really.

As for leading 'man', Barley, a shaggy dog star is born.