David Roy chats to west Belfast-born film-maker Vincent Kinnaird about his new documentary on the life and work of Fr Des Wilson, the 'people's priest' who did so much for his community in Ballymurphy during the Troubles... 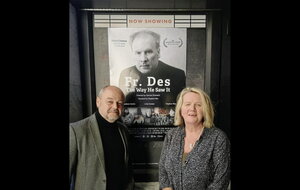 "DES'S voice was very much down-to-earth and of the people, and sometimes it's harder to get that out there – but we will keep trying," says director Vincent Kinnaird of the ongoing battle to get broadcasters interested in Fr Des: The Way He Saw It, his new documentary about much-loved west Belfast priest Fr Des Wilson which recently premiered at the Galway Film Fleadh.

Often dubbed 'the people's priest' thanks to his supremely compassionate, socialist and humanitarian outlook, south Belfast-born Fr Des was based in the economically blighted Ballymurphy area from 1966, dedicating himself to helping his local community during the most turbulent of times as the Troubles erupted on his doorstep – literally, for Fr Des chose to live right in the heart of Ballymurphy at 123 Springhill Avenue.

There, he helped establish Springhill Community House, a vital social and educational hub for the area which was open to all – even Mother Teresa and her Missionaries of Charity visited for a period in 1971 (somewhat controversially, as the film explains) – sowing the seeds for the present day Conway Education Centre at Conway Mill.

Indeed, as the documentary reveals, Fr Des firmly rejected the preconceived notion that Catholic and Protestant working class people were incapable of peacefully co-existing, working tirelessly to keep the lines of communication open between both sides even as the Troubles escalated.

"Des kept in contact with working class groups whether they were any shade of republicanism or loyalism," explains west Belfast-born film-maker Kinnaird, who started making the documentary back in 2011, regularly visiting Fr Des to conduct the revealing on-camera interview sessions about his life's work which form the backbone of his engrossing and inspirational film.

"I mean, he kept conversations going with John McKeague, who did some terrible things over the years, alongside more progressive loyalists like David Ervine and Jackie Redpath."

He continues: "There's a narrative there that doesn't seem to have come out very much, in my experience."

As the documentary reveals, Fr Des's community work actually brought him into conflict with his religious superiors, despite the fact that his altruistic actions were directly inspired by Jesus himself.

Bishop William Philbin did not appreciate a priest criticising the Church for not doing more to intervene on behalf of those living in squalor in Ballymurphy, nor the fact that Fr Des openly questioned why the Catholic hierarchy refused to speak out more strongly against the failings of the unionist governments of the day.

Indeed, the film postulates that, had the Church been more robust in its condemnation of the British government over its handling of the Ballymurphy massacre, which claimed the life of Fr Des's friend and colleague Fr Hugh Mullan, it may have actually prevented Bloody Sunday from ever occurring.

At loggerheads with Bishop Philbin, Fr Des famously resigned his position in protest, going on to study Community Relations at the University of Ulster in order to better serve the people of Ballymurphy, which he continued to do right up to his death in November 2019, aged 94.

"Des went to senior figures in the Church and said they needed to 'do more to stand up for the people here' – but they didn't, you know?," explains Kinnaird of his subject's headline-grabbing stand.

"However, you see at the end of the film that Bishop Trainor is there at his graveside along with other Church officials, so I think there was some level of recognition there that Des had had a point.

"More could have been done, the might of the Catholic Church could have stood up against one government. But unfortunately that didn't happen."

The documentary tells Fr Des's story via a mix of interviews filmed with the man himself and those who knew him best over a period of almost 10 years. Oscar-nominated actor Stephen Rea, who was involved in a number of the priest and talented playwright's community theatre productions over the years, provides additional narration along with glowing testimonial for a man who was almost universally loved and respected.

"I first met Fr Des back in 2009 when I was making a film for the BBC, The Burning of Bombay Street," recalls Kinnaird, who won a Bafta/Kodak showcase award for his short drama Lladia and has previously worked with Ken Loach and Richard Attenborough.

"He struck me as a person of absolute integrity, someone of courage who wasn't afraid to stand up for people. At the time I didn't realise that Des had to disengage from the Church in order to continue doing really important work on the ground where people needed it.

"That really caught my attention, and then with everyone I spoke to about him – even people who maybe didn't agree with him – there was never any doubt about his integrity. I just thought, 'yeah, we've have a special person in our midst and we have an opportunity here to actually document him'."

Happily, Des himself was amenable to the idea, as Kinnaird explains: "Having written books [including his memoir The Way I See It, which inspired the documentary's title] Des always knew the importance of documenting things. He would have been comfortable enough in front of the camera and putting things on the record, although very modest.

"For example, he was keen from the start that we not make it 'all about him' – he wanted us to highlight the other people involved at Springhill House as well, like the late Noelle Ryan who did great work there."

He adds: "When you're a factual documentary film-maker, you say 'right, well this is on my doorstep, this period of time is something that I actually grew up through and I want to know more about it'.

"I think Des's story needed to be told – and being from the Falls Road area myself, it was a story I really wanted to get out there. Little did I know it would take so long."

Happily, Fr Des: The Way He Saw It is finally finished and ready to be seen worldwide. Following a promising 'work-in-progress' screening at last year's Docs Ireland festival, the final theatrical cut premiered at the 2022 Galway Film Fleadh.

"It was well received and it was great to get it out to an audience of mixed ages in the new cinema, The Pálás, in Galway," enthuses Kinnaird, who participated in a post-screening Q&A about the film at the event with TV producer Lelia Doolan, a friend of Des's who was one of the founders of the Galway Film Fleadh and actually features in the documentary.

Vincent Kinnaird and Lelia Doolan at the post-screening Q&A for Fr Des: The Way He Saw It

"People in the Republic would know of people like Fr Peter McVerry in Dublin, who would have a similar kind of outlook and humanist approach, but they maybe wouldn't be so familiar with Des. So we had a lot of people there who were very inquisitive about the film afterwards."

Of course, a film festival is the ideal 'shop window' for those seeking wider distribution for their projects.

"Michele Devlin from the Belfast Film Festival is an executive producer on the film, and she was there, so it was good to catch up with her and talk about plans for where we go next with it," enthuses Kinnaird, who admits that he's now more comfortable 'selling' the Fr Des documentary than when he first started the project.

"Initially, I just found it hard to pitch it," he tells me.

"But when Trevor Birney [Fine Point Films] and Michele Devlin came onboard as executive producers, we did try to get it out there – and Northern Ireland Screen have supported it a couple of times along the way.

"We're now talking to broadcasters again about looking at the film and possibly doing a shorter broadcast version, as well as maybe taking it to the Cork Film Festival and the Foyle Film Festival.

"It's all about putting the push on to keep it moving in the year that follows."

With a 'star' as instantly compelling as Fr Des as its subject, it surely won't be long before his inspirational story reaches the wider audience it so richly deserves.

"Sometimes with a passion project like this, you just have to go and make it and then worry about getting it out there," offers Kinnaird.

"I'm really glad to have been able to tell his story."

:: Keep up to date with the latest on Fr Des: The Way He Saw It at notasuch.com.