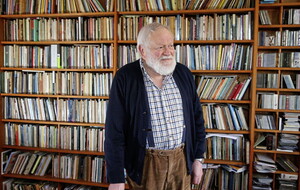 A new edition of John Hewitt's Selected Poems, edited by the acclaimed poets Michael Longley and Frank Ormsby has been published by Blackstaff Press.

Born in north Belfast, John Hewitt is one of our most significant poets, laying foundations for the 1960s generation of poets that included Seamus Heaney, Derek Mahon and Michael Longley.

His influence on the arts was significant and his legacy continues in the annual the annual John Hewitt International Summer School in Armagh.

This new edition of Hewitt's Selected Poems, which is now on sale, will ensure future generations can read and appreciate Hewitt's poetry, 35 years after the author's death.

Co-editor Michael Longley describes him as a poet who “held out the creative hand rather than the clenched fist [and] made himself heard in a land of bellowers without raising his voice”.

Last week at a special event to mark the publication, a room was named after Hewitt in the Harrison Boutique Hotel on Belfast's Malone Road, a building once associated with the poet and his social activist spouse Roberta Black.