A Confetti moment for poet Bebe

Award-winning Co Down poet Bebe Ashley is using plastic fragments to bring poetry to blind and partially sighted people. She tells Gail Bell how learning Braille and sign language is opening doors of inclusivity in the arts 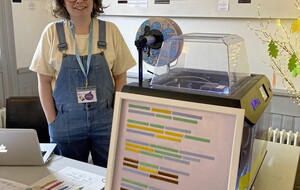 Bebe Ashley used a 3D printer to create Confetti, her poem in Braille, which is on display at the Crescent Arts Centre in Belfast.

The 27-year-old author of Gold Light Shining - looking at celebrity culture and Harry Styles in particular (recently issued for reprint by Banshee Press) - is using her poetry to raise greater awareness of sign language and also the need for easier access to the arts for blind and partially sighted people living in Northern Ireland.

A Northern Bridge AHRC (Arts Humanities Research Council) funded PhD student at the Seamus Heaney Centre in Belfast, Ashley is currently charting her progress [in poetry] towards qualifying as a British Sign Language (BSL) interpreter while working on another major project - Confetti - involving the creation of a 3D printed poem in Braille.

Alongside this, she was one of 10 poets commissioned by the Poetry as Commemoration Project to write a poem on events inspired by the archives of Ireland 100 years ago in relation to the Irish War of Independence and Irish Civil War.

Selected by the Arts Council and Future Screens NI, Confetti was one of nine projects to receive a Digital Evolution award for work exploring poetic potential of Braille and 3D printing - the results of which can be seen this month at the Crescent Arts Centre when the resulting 3D poem goes on display.

And, as part of the Bounce arts festival organised by the University of Atypical which showcases new work from deaf, disabled and neurodiverse artists and writers, the Killinchy poet will be taking a special one-off 'New Encounters' poetry workshop at the Crescent in October.

It will be Ashley's second tutoring gig at the Crescent - a writer-in-residency role for Belfast Book Festival in June had to move online when she came down with Covid.

During this time, the poet – who cites recent highlights as working as an editorial volunteer at the Paralympic Games in Tokyo and reading a poem at the inauguration dinner for Queen's University's first female chancellor, Hillary Clinton – worked on the new poem inspired by words from festival audiences and translated into Braille using a 3D printer.

"The poem is printed in recycled plastics with the idea to raise awareness of the accessibility of literature," she explains.

"I'm excited about the poetry workshop – I have Braille bananagram tiles, a bit like Scrabble tiles, where each letter is 'Brailled', so we'll do some prompts using those to create new poems.

"At the end of the week in June, I was meant to reveal the big poem, but couldn't because of Covid, so I'm looking forward to it going on display now – just in time for the new workshop.

"Confetti was a really important project for me because I started to realise how little access to the arts there is in terms of guides for blind and partially-sighted people, so I wanted to make something very tactile and also beautifully presented for an audience often neglected in the arts."

She taught herself Braille as a new language during lockdown when face-to-face sign language classes were on an enforced break.

"I love languages, I love translation, and sign language is a very social language, so when classes stopped because of the lockdown, I retreated into myself and was very lonely," she recalls.

"That was when I picked up Braille because it is a very solitary thing you can learn at home.

"I just needed my text books and I would sit in front of my Brailler, which is a bit like a mechanical keyboard, and press six keys in different combinations. It was almost like playing piano and I found it very rhythmic while also requiring a lot of focus; it was like learning to read again.

"I think we take for granted our ability to read in our native language. Learning Braille also makes you appreciate how difficult life can be for someone with vision problems. I didn't realise how much we read in the periphery, for instance, even just signs on the street or labels on things, or a name badge at an event. Most of us take in this extra information really quickly without having to ask for a lot of help."

Originally from Bedfordshire in England, Ashley moved to Northern Ireland to study for a Poetry Master's at Queen's – her second choice after she failed to land a cleaning job at a research station in Antarctica – and loved the place so much decided to stay.

"I found people are so happy here to talk about writing all the time – in the pubs, in the taxis, at the airports... and I'd never felt that before," she reflects.

"In Northern Ireland, I was surrounded by the arts and wanted to make the most of it."

While studying part-time, she took an administrative job at Kinghan Church for the deaf and hearing impaired at Botanic Avenue – a move which reignited interest in accessibility, especially in terms of the arts.

Now, having reached Level 4 in her BSL studies, she hopes to combine poetry with sign language as well as Braille in the future, using her role at the Seamus Heaney Centre – funded through to 2025 – to raise awareness of sign language in the community generally.

"It is a difficult journey, to reach the level of interpreter, and my poems reflect that challenge," says Ashley, longlisted for the Ivan Juritz Prize for Creative Experiment and awarded a Chair of Ireland Poetry Trust Award last year.

"They chart every emotion, the progress, the obstacles, the frustration, but also, I hope they motivate me too, seeing how far I have come already.

"It is a real privilege to be able to learn this beautiful, expressive language and it is important to keep a record of the journey, so that, hopefully, more people will consider learning sign language, while being more open to other people's experiences of the world – and how we can improve that across the board."

With regard to subject matter, her poems, seen in publications such as Poetry Ireland Review and Modern Poetry in Translation, tend to reflect life in general and how we perceive and experience it, compared to others.

They are, she says, "quite visual" poems, "usually with a lot of colour" and mirror personal interests including pop culture and celebrity culture on which her 2020 debut poetry book was based.

"All poems are different, but normally I'm interested in pop culture and everyday encounters – how we encounter different people in different spaces," she says.

"With Confetti, I was thinking of fragmentation as well as celebration – that one moment when you throw everything up in the air and it comes fluttering down.

"I wanted to capture a version of that, reflected in the fragments used in the 3D poems. There is a need to create poetry that is not limited to just one form."

:: Bebe Ashley's 3D poem in Braille is currently on display at the Crescent Arts Centre, Belfast, where she is taking a Writing Poetry for Absolute Beginners course, beginning September 15. The New Encounters poetry workshop for blind and partially sighted people takes place on Saturday, October 8.

A Confetti moment for poet Bebe