In an honest interview, Belfast artist Terry Bradley chats to Jenny Lee about his career, his plan to inspire young artists and the darkness beneath his colourful paintings 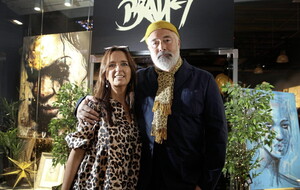 Terry and wife Ashley standing in front of his paintings, Wounds (left) and Study II (right)

“I'M still that shy guy from Belfast who draws. That's it,” says Terry Bradley. Despite his commercial success and international acclaim, the artist admits that he “hides behind his art” and uses his canvases as a means of therapy from the demands of life.

“Drawing is my escapism,” says the 57-year-old father of three, who first started painting as a child, growing up in north Belfast during the Troubles.

“Our house was near the peace line – it was like Vietnam. My mum tried to keep me off the street, so I just drew. As a result I wasn't socially prepared and secondary school was the worst days of my life.”

Visits to the library helped him escape as he delved into The Adventures of Tintin. His work, especially his biro drawings, are still shaped by the black lines of the vivid drawings of cartoonist Georges Remi - known by the pen name Hergé - that illustrated the books.

“They were a massive influence,” grins Bradley, pulling up his sleeve to show me his latest tattoo – Tintin.

From an early age Bradley discovered that drawing had a calming effect upon him, and used his sketch pad to portray his emotions.

After leaving school, and jobs in a factory and building site, Bradley got the opportunity to move to Dublin and embark upon an unlikely career for an introvert – as a model.

“I was helping out at a hairdresser's brushing the floor and a woman asked me to do some photographs. At £55 for an hour's work, I wasn't going to turn it down. From that, someone involved in Brown Thomas in Dublin got in touch and it just took off,” explains Bradley, who learnt to put on the persona of a confident party-going model.

“I acted. I acted even before I got the job. It's almost a blur. I did it, I got paid, I was wild. People didn't know the real me,” he reflects.

Bradley also used this time to observe the complexities of people and recreate them on paper, including the girls he worked with in Dublin.

“In the early days I used to think these girls were perfect – glamorous, confident and wealthy," he explains.

"Then I realised they were always slightly damaged. They too were putting on a persona."

A painting he did as a thank you present to nightclub owner John Reynolds led to Bradley's first solo art exhibition in 1996 – and his art career has flourished ever since.

He has a worldwide cult following and is the European ambassador for Harley Davidson motorcycles. His bespoke artwork can be seen in, among other places, the Dead Rabbit bar in New York and the Titanic Hotel in Liverpool and Belfast.

While he could exhibit throughout the world and have the lifestyle that accompanies being a successful artist if he wanted, Bradley says he is “embarrassed by the success”, and prefers to spend his time working from his “Batcave” studio in the Co Down village of Kircubbin.

"A lot of the people I paint exude a false kind of confidence. I add tattoos, beards, hats, all as something they can hide behind – just like I hide my emotions in a busy painting.”

Bradley is very open about his life-long battle with anxiety and depression. While he has tried different therapies and uses CBD oil and medication to manage his symptoms, he believes that art is always the best therapy.

“My nerves, my insecurities and my anxiety fuel a lot of the work. I draw and I paint - that's how I cope in life,” says Bradley, who typically would have three canvases on the go in his studio, depending upon his mood.

“I have a calm one, a controlled drawing and one I can go mad on. I have ruined canvases by over-thinking them,” he confesses.

Bradley's signature Never Give Up wristbands, available free of charge, provide a symbol of support and solidarity to those struggling with mental health and for their family and friends. And he is delighted to have recently added Never Give Up head scarves to his collection.

Whilst his work in the past, including his Forget-Me-Not painting, has explored the emotions of loss and of his parents' battle with dementia, Bradley's recent works, Wounds, Pain and Sorrow, Numb and Left Behind are also fuelled by grief.

His mother died during Covid and his mother-in-law died just over two months ago from an aggressive and sudden cancer.

“I've started writing on canvas what I feel so that and the titles of the paintings are just so personal,” admits Bradley, grateful for the emotional and practical support of his wife Ashley, who has been instrumental in the gallery for the past 10 years.

One of the most empowering effects of his art is the responses from customers saying that the emotion of a painting strongly resonates with them.

“I just love the power of art. Over the years I have paintings I look at in the morning and they give me strength. There have even been people who have had family members pass from suicides who have said my paintings helped them cope.”

Making his art accessible is of key importance to Bradley. Last month he officially opened a new gallery in Belfast's Victoria Square.

The expansive new space will display an expanded collection of Bradley artwork, prints and quirky décor, but will also provide space for a range of new community initiatives aimed at connecting more people with art and encouraging young creatives.

As well as the weekly free Bradley Art Experience talk, there are plans for new ways to connect people with his art.

“I sometimes liken my artwork to having pages of my diary displayed for everyone to see, but I think that really resonates with people. Art is a powerful connector and I love that my gallery is open to everyone, from all walks of life.

“So many people don't get close to art as they see it as not for them. I love when kids can see my work and are inspired as it can literally change their lives.”

He has also launched the Bradley Art Prize, to encourage and support new creative talent among young people in the north.

Winners selected by a panel of esteemed judges, will have their work framed and proudly displayed in the Bradley Gallery in Belfast next summer and be showcased at the Northern Ireland Executive Office in Brussels.

“I never went to art college and the art prize is something that would have helped me. I want to give kids some real inspiration. It is judged by real people who have real careers, and I hope it helps them see they too can have a career in art.”

Bradley, who is keen to point out that it can be art of any medium – from tattoo art to film-making or design - has some words of advice to those entering the competition.

“Put your heart and soul into it. I want to see passionate art, rather than clever art.”

:: More information on Terry Bradley's work and the Bradley Art Prize at Terrybradley.com.