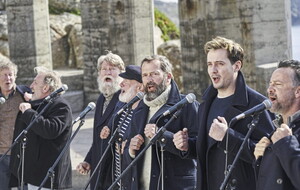 THE rags-to-riches story of eight men from Port Isaac in Cornwall, who signed a record deal in 2010 and became the first traditional folk act to land a top 10 album in the UK charts translated sweetly into the fish-out-of-water drama comedy Fisherman's Friends.

Meg Leonard and Nick Moorcroft make their directorial debut with a life-affirming sequel that draws inspiration from the frenetic 14 month-period between the release of the LP and the group's 2011 performance on the Glastonbury Festival's Pyramid Stage at Worthy Farm on the same Sunday line-up as Beyonce.

The script takes bass notes of fact and adds rousing choruses of fanciful melodrama and romance including a debut acting role for Irish singer-songwriter Imelda May as a spunky love interest for one swarthy sea shanty singer.

It's heart-warming, feelgood entertainment, filled and crimped to the same wholesome design as its predecessor, including a daring rescue worthy of an episode of Lassie and a moving cliffside rendition of Harry Glasson's anthem Cornwall My Home.

The underdog storyline is writ large from the moment a London record label head honcho (Ramon Tikaram) dismisses the band as "Moby Dick And The Whalers" and supports the promotion of an airhead pop diva because "success is measured in record sales not brain cells". Inevitably, he chokes on those words.

The nine remaining members of the Fisherman's Friends embark on a whirlwind UK tour.

Lead singer Jim (James Purefoy) hasn't processed the death of his father Jago (David Hayman) and he seeks emotional support in a whisky flask to the dismay of A&R man Gareth (Joshua McGuire).

The 'buoy band' returns to Port Isaac in sombre spirits.

"When father died, the band died with him," he growls, picking fights with fellow members Leadville (Dave Johns) and Rowan (Sam Swainsbury) after farmer Morgan (Richard Harrington) successfully auditions to join the ranks.

Disharmony crescendos in front of the media with Jim drunk and disorderly in charge of a microphone at the Minack open-air theatre in Penzance.

Perhaps visiting songbird Aubrey Flynn (May), who has embraced sobriety after a hellraising past, can shepherd lost soul Jim back from the brink of self-destruction.

Fisherman's Friends: One And All has been composed to warm the cockles of our emotionally manipulated hearts and it's hard to resist the siren song of Leonard and Moorcroft's picture.

Cinematographer Toby Moore showcases Cornwall's natural beauty in every conceivable light including a heart-to-heart on a cliff-top bench with a spectacular panoramic view of the port.

Pacing is gentle and the only point of contention is an on-screen discussion about scone layering etiquette. Battle lines are drawn in 'jam, then cream' – or vice versa.