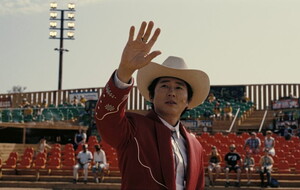 ACTOR and comedian Jordan Peele jump-started an urgent cultural conservation about interracial dynamics with his 2017 horror Get Out starring Daniel Kaluuya as a photographer, who foolishly agrees to visit his white girlfriend's family in upstate New York.

His dizzying success drew parallels to the meteoric rise of M Night Shyamalan in 1999, who was the toast of Hollywood with the supernatural thriller The Sixth Sense.

Spookily, Peele's eagerly anticipated follow-up to Get Out and Us is also a close encounter of the second-hand kind, imagining first contact with extra-terrestrials as a stand-off between species, captured on large format IMAX cameras by Interstellar cinematographer Hoyte van Hoytema.

Nope looks spectacular on a big screen, augmented with hypnotic visual effects that echo the grandeur of Arrival.

For the opening hour, Peele's script teases an otherworldly mystery, interspersed with unsettling flashbacks to a horrifying incident on the set of a family sitcom called Gordy's Home.

Alas, the writer-director mishandles the pay-off (like Shyamalan) and overloads a bewildering second half with ideas that lack cohesion.

The siblings struggle to keep the business afloat and honour a rich filmmaking legacy that dates back to one of the earliest examples of a moving image: English artist Eadweard Muybridge's series of photographs of a galloping horse.

OJ and Emerald proudly claim the black jockey depicted in The Horse In Motion was their ancestor.

The Haywoods are under pressure to sell the ranch to former child actor Jupe Park (Steven Yeun), who runs the Jupiter's Claim theme park on neighbouring land with his wife Amber (Wrenn Schmidt).

When all hope seems lost, the Haywoods discover an unidentified aerial phenomenon (UAP) hovering over their homestead.

Nope has the scope and visual spectacle of a summer blockbuster including nightmarish scenes of humans and livestock being sucked into the air.

If The X-Files was correct and the truth is out there, the proof is slippery and frustratingly elusive in Peele's film.