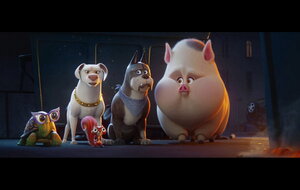 EVERY dog, potbellied pig, turtle and red squirrel has its day in an exuberant computer-animated comedy based on DC Comics characters, who first appeared in print 60 years ago.

The feature film directorial debut of Jared Stern, one of the screenwriters of The LEGO Batman Movie, shares creative DNA with that rumbustious picture distilled into an irreverent script co-written by John Whittington.

Tails wag when an excitable pooch answers the call of a Batman-shaped vinyl squeaker and a deadpan Dark Knight (voiced by Keanu Reeves) observes the reverie and growls: "That better be a licensed toy… or I will freak out!"

DC League Of Super-Pets enthusiastically goes for walkies with familiar characters including Superman, Wonder Woman and Aquaman but shifts focus to the motley crew of critters who will join the Justice League as valiant sidekicks.

It's an outlandish origin story on paws, flippers and trotters that tugs shamelessly on animal lovers' heartstrings and gifts Kate McKinnon a plum vocal role as a furless antagonist with self-delusions of grandeur who is, by her own cackling admission, "a few guineas short of a pig!".

"Superman and I are inseparable. I'm his ride or die," observes the otherworldly pooch, who sports a matching red cape attached to a gold collar.

DC League Of Super-Pets strikes a pleasing balance between action-oriented set pieces and interspecies angst not too far removed from The Secret Life Of Pets (also featuring a lively vocal performance from Hart).

Stern's picture, co-directed by Sam Levine, has moments when it truly soars ("Pup-up and away!") and there is clear potential for a family-friendly franchise to trot alongside darker forays into a sprawling live-action universe of tormented heroes and villains.

A couple of additional scenes embedded in the end credits provide additional giggles and cute cross-promotion.