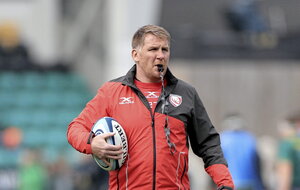 Jonny Bell was Gloucester Rugby's defence coach but he is now back in that role with Ulster.

SALE away might sound like blissful pleasure but even though it's a very tough test Ulster Rugby reckon they can steady their ship in Europe this weekend.

The Ravenhill men were rocked by Saturday's setback at Leinster, losing a 19-point lead and shipping 28 second half points to lose out at the RDS in the United Rugby Championship.

This Sunday they travel to take on Sale in the European Champions Cup opener and Ulster defence coach Jonny Bell believes a big performance can earn an away win against the team currently placed second in the Gallagher Premiership:

"They're a team that start fast, they like to get out of the blocks, particularly at home. When you're going away in Europe you have to start quickly. You can't afford not to - sometimes you don't get two bites of the cherry. So it's important that we start well, start accurately, and we impose ourselves on the game.

"I suppose the boys are well used to it now, having come through COVID trying to generate your own atmosphere and they're pretty resilient in that way.

Bell returned to his home province earlier this year after coaching spells with Gloucester, Glasgow, and Worcester since 2015, and he believes there is something special about Ulster's relationship with European competition:

"Oh, look, it's part of the DNA here, isn't it? I think that's what I probably missed the most when I was across the water, just the real appetite for European rugby. When I was at Gloucester obviously that they weren't in the Champions Cup at that stage, they were in the Challenge Cup, and they took that pretty seriously.

"But it's different when you're in the Champions Cup with the pedigree, the history that the Irish teams, never mind Ulster, have in this competition. We know that it really does bring the best out of everybody so there's a huge excitement around it.

"There's no better kind of game to get you back up and get you back into things than a tough European encounter against one of the top two in the Premiership."

Ulster look like having to take on Sale without three key players – scrum half John Cooney, hooker Tom Stewart, and forward Iain Henderson, all of whom have to undergo World Rugby's head injury assessment protocols after being forced off during that galling loss to Leinster.

Nathan Doak, Duane Vermeulen, and Rob Herring were the replacements in Dublin, and they are contenders to start at the AJ Bell Stadium in Salford on Sunday as Bell rates that HIA trio as "highly unlikely" to feature.